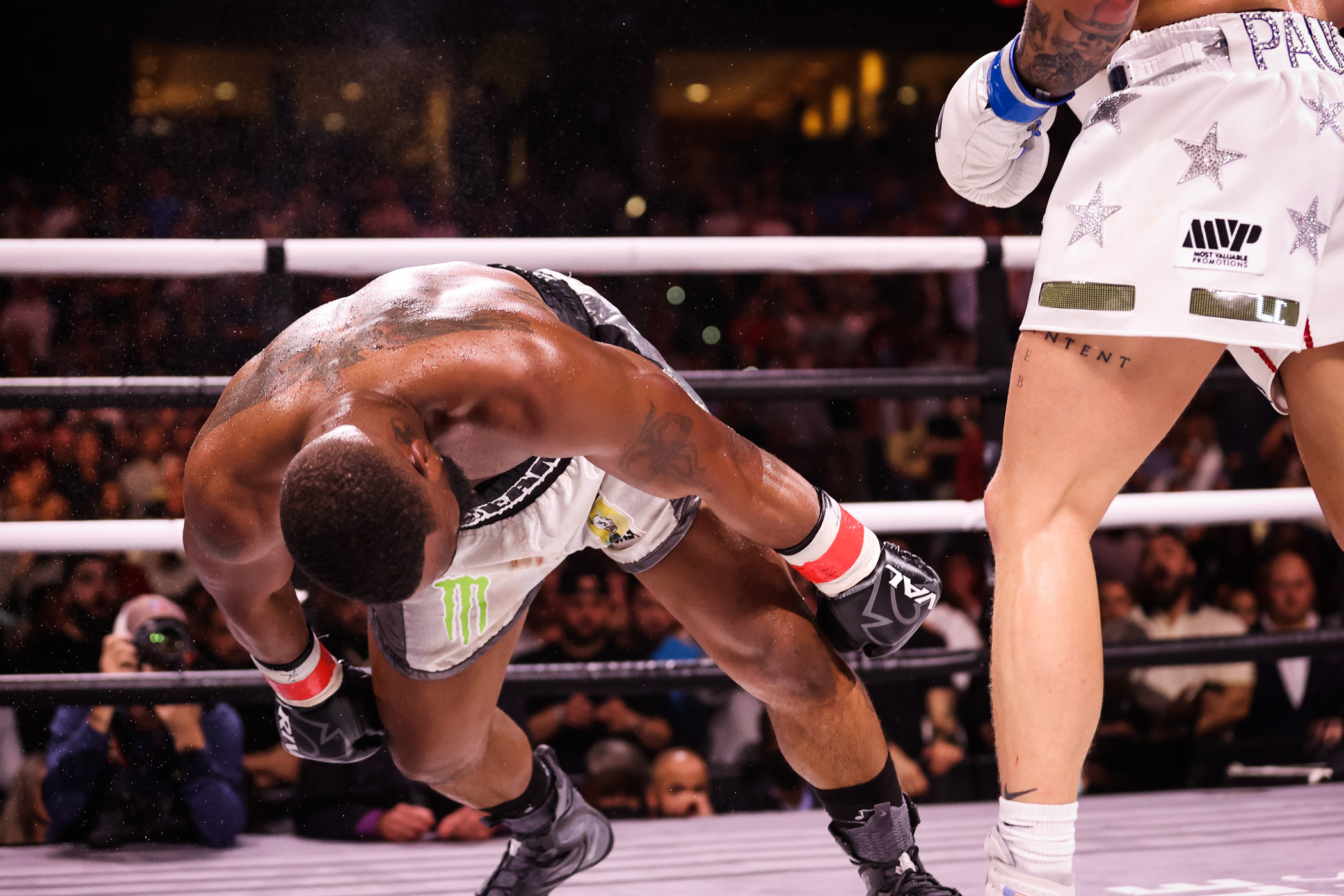 TAMPA, Fla. – December 18, 2021 – Jake “The Problem Child” Paul left no doubt in his rematch with Tyron “The Chosen One” Woodley, registering a strong candidate for Knockout of the Year in front of a sold-out crowd of 18,685 screaming fans at AMALIE Arena in Tampa. live on an action-packed SHOWTIME PPV telecast Saturday night.

All it took was one punch for boxing’s newest superstar to silence his critics and prove that his power ranks among the most devastating in the sport and carries into the later rounds is as real as it gets. A deadly right hand connected flush on Woodley’s chin in the sixth round, sending him face-first into the canvas and knocking the former UFC Champion out cold in a moment that quickly went viral and will live on the internet in perpetuity Click HERE to watch: https://twitter.com/ShowtimeBoxing/status/1472440142707183616

In addition to scoring the most emphatic win of his young career and moving to a perfect 5-0 with 4 KOs, Paul also had to fight through the most adversity he has faced yet. In the third round, Paul suffered a deep cut on his forehead after he was accidentally clipped by Woodley’s elbow.

“It was a tough fight,” Paul told SHOWTIME’s Ariel Helwani in the ring post-fight. “The blood was getting in my eye from when he elbowed me. I got the job done and I knew it would happen like that. I was setting up the shot the whole fight and he didn’t see it coming.”

Prior to the closing moments, it was a close fight. Paul was ahead on all three judges’ scorecards at the time of the stoppage, but it was the former MMA star Woodley (0-2) who was the busier fighter. After taking the fight on short notice following Tommy Fury’s withdrawal, Woodley threw 184 punches compared to Paul’s 170. Each fighter connected on 43 punches, but only one of them mattered in the end.

“Tyron is a legend,” Paul said. “Don’t take anything away from his career as a UFC Champion. I respect him for taking this fight on two weeks’ notice because Tommy Fury backed out of the fight. That was a tough fight right there.”

“I don’t know why I dropped my hands,” said Woodley in the post-fight press conference. “In this sport, it only takes one mistake. Literally one mistake.”

In the co-featured bout, the most decorated fighter in women’s boxing history and consistently one of the most entertaining fighters in all of boxing, Amanda Serrano (42-1-1, 30 KOs) scored a dominating unanimous decision over gutsy Spaniard Miriam Gutierrez (14-2, 5 KOs). The judges scored the 10-round lightweight bout 99-90, 99-91 and 100-90 all in favor of the seven-division star Serrano.

“I think I belong in the 135-pound division,” said Serrano, who moved up from her August weight of 124 pounds. “I belong wherever they put me. I’m a true warrior. I’m a true champion. My power comes wherever I take it. You can see her face and look at my face.”

The Brooklyn-based Puerto Rican Serrano began the bout at a torrid pace, connecting on 37 of 86 punches thrown in the two-minute opening round. It looked like it could be a quick night’s work for Serrano, who unleashed a flurry of power punches on the up-against-the-ropes Gutierrez. However, Gutierrez showed incredible toughness and resolve to make it out of the round.

In the 10th and final round, Serrano did everything she possibly could to finish the incredibly tough Gutierrez, but the 38-year-old Madrid native ate shot-after-shot and still returned fire. Serrano threw 94 punches in the round, connecting on 38 of them.

“She’s a tough girl. She’s a big girl,” Serrano said. “Tonight, she’s probably 160 or 165 pounds. Honestly, I’m like 133 or 134 pounds, but it doesn’t matter to me. She’s a tough fighter. She did say she was in better shape this time than when she fought Katie Taylor because she had a year layoff. Now, she just had a fight last month that she won. I fought the best Miriam Gutierrez and I beat her.”

“This isn’t a sad or bitter loss, it’s a dignified one,” said Gutierrez, whose only other loss came against the aforementioned Taylor, the undisputed lightweight champion. “It was a war from the get go until the end. It’s been an honor.”

With the win, Serrano sets up a potential 2022 super fight with Taylor. “I’m ready for Katie,” she said. “I don’t think she’s as strong as Miriam, so I think I’m okay.”

The second pay-per-view bout was a highly entertaining, crowd-pleasing four-round special attraction between three-time NBA All-Star Deron Williams and the NFL’s third all-time leading rusher Frank Gore. When the dust settled and the final bell tolled, it was Williams who came out victorious on the judges’ scorecards via split-decision. The scores read 38-37 and 40-35 in favor of Williams, and 38-37 in favor of Gore.

“Honestly, I probably looked terrible out there,” said two-time Olympic Gold Medalist Williams. “I felt like my last five sparring sessions I was on point. My head wasn’t coming up. As soon as you get out here and you start getting touched, it’s a whole different thing. All your training goes out the window. It was fun. I had a chance to get out here, but like I said coming in, it’s one and done.”

Both legends from opposing sports came out swinging in the first round of their boxing debuts. The frantic action saw both fighters exchange big right hands and in the second round, the action continued at a lightning pace.

Following some sloppy moments that resulted in both fighters wrestling each other through the ropes, the signature moment from the fight occurred when Gore showed his inexperience and stopped defending himself for an instant. Williams capitalized by landing a massive right hand that stunned Gore. With the former San Francisco 49er star holding himself up against the ropes, referee Christopher Young scored a knockdown for Williams.

“I used my wrestling background to my advantage,” Williams said. “I just wanted to prove to myself that I could get out here and do this. Everybody that’s talking on Instagram and Twitter, they wouldn’t step in here in front of all these people and on PPV for their first fight. Hats off to Frank. He had a dream. He had a goal. In my mind, we’re both winners tonight.”

Throughout the four rounds, Williams landed 48 of 156 punches thrown and Gore landed 38 of 166 punches thrown. The 6’3” Williams, who held an eight-inch reach advantage, also out-connected the 5’9” Gore 35-28 on power punches.

“It’s all good,” said Gore. “He won the fight tonight. He fought hard. I fought hard. I just still have to learn some stuff. He did a good job tonight. We’ll see if I fight again. I had fun tonight. I’ll go back and talk to my team to see what’s next.”

In the opening bout of the PPV telecast, Australia’s Liam Paro (22-0, 13 KOs) rebounded from an early knockdown to win a split-decision victory over Puerto Rico’s Yomar Alamo (20-1-1, 12 KOs) in a closely-contested 10-round junior welterweight bout. Two judges scored the fight 95-94 and 96-93 in favor of Paro, while one judge favored Alamo 95-94.

“I kept levelheaded after the knockdown, hats off to him for that,” said the 25-year-old Queensland native. “I shook it off after the first round and just did what I had to do to win. I established my jab, that was the most important thing. Alamo gave me a hell of a fight but we stuck to the gameplan and prevailed in the end.”

In the opening round, it was the 26-year-old Alamo who drew first blood. With Paro letting his guard down, Alamo landed a counter right-hand that followed a short left hook. Paro, who made his U.S. debut and fought outside of his native Australia for the first time, hit the canvas for just the second time in his career.

However, Paro didn’t panic and used his activity, jab and body attack to string rounds together and build a lead that he wouldn’t relinquish. He held advantages of 497-333 in total punches thrown, 31-12 in body punches landed and 43-13 in total jabs landed. Two of the three judges gave rounds two through six all in favor of Paro. Despite dropping rounds nine and 10 on all three judges’ cards, Paro did enough to keep his unblemished record intact.

“I’m just going to chill out back in Australia, enjoy Christmas and get back to the gym next year to secure a world title,” Paro said.

Tonight’s main event, as well as Serrano vs. Gutierrez and Williams vs. Gore will air on SHOWTIME on Tuesday, December 28 at 9 p.m. ET/PT