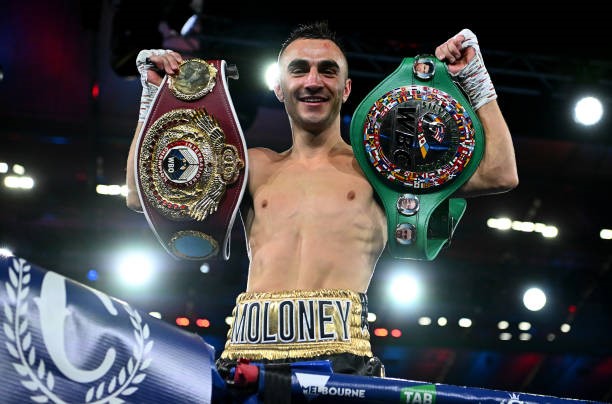 (July 1, 2022) – Australian Mayhem, Jason Moloney has landed himself at number 1 in the latest World Boxing Council & World Boxing Organizations ratings, with the hopes of a world title shot being imminent.

In recent times, a former foe of Moloney, the pound-for-pound star Naoya Inoue put on a masterclass performance against the legendary Filipino Nonito Donaire, unifying the WBA, IBF, and WBC world titles. What is next for Inoue remains to be seen, however, Moloney doesn’t want to hang around for the world title, as he gave his assessment on his future prospects.

The all-action Aussie said, “I’ve been in with Naoya Inoue, he really is a pound-for-pound superstar. Not many people will get near him, even when he moves up in weight. I can’t see anyone beating him right now.

“I am delighted to be ranked at number one in the WBC & WBO and thank you to my team. Tony Tolj, Top Rank, and of course a massive thank you to presidents Mr. Sulaiman of the WBC along with Mr “Paco” Varcarcel for ranking me as their number 1 bantamweight. It’s a great honor to be ranked number 1 by the WBC & WBO, I’m very excited for what that holds for my future.

“I’m just thinking out loud in saying, it is common for a sanctioning body to create another world champion when there is a unified champion who is stepping into those mega fights. If that was the case I would love to fight for the world title next, but I’ll leave it to my team to make the right moves for me.”

He said, “I’d love the Paul Butler fight. I respect Paul he’s a very good fighter, but I win that fight every day of the week and the boxing world knows that. If that fight can be made that’s great. I wouldn’t stand in the way of a four-belt unification, of course, I respect the sport, but if Inoue-Butler can’t be made I’ll happily fight Butler next.

“I’ve shown I’ll travel to fight anybody, I fought Emmanuel Rodriguez in Orlando, I fought Inoue in Vegas, it doesn’t bother me, a ring is a ring. If Butler’s team can facilitate the fight and don’t choose to fight Inoue name the place I’ll be there. If Top Rank facilitates it I’ll fight on the moon if Bob Arum tells me to, I will be Australias next world champion.”