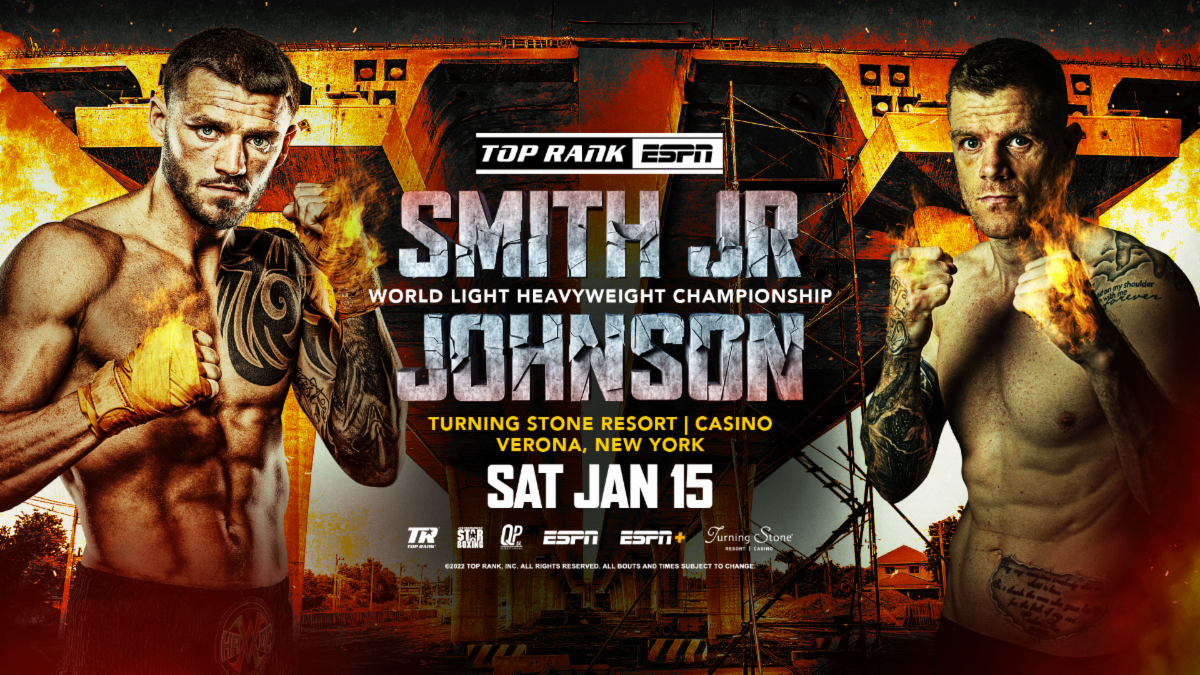 Smith-Johnson kicks off the Top Rank on ESPN 2022 schedule with a battle between two of the division’s biggest punchers. Smith was supposed to defend his title Oct. 30 in New York City, but a COVID-19 diagnosis delayed his return to 2022.

In the 10-round featherweight co-feature, the undefeated Abraham “El Super” Nova, who hails from Albany, N.Y., will face Mexican action star Jose Enrique Vivas. Smith-Johnson and Nova-Vivas will air live on ESPN and ESPN Deportes (simulcast on ESPN+) at 9:30 p.m. ET/6:30 p.m. PT.

Promoted by Top Rank, in association with Joe DeGuardia’s Star Boxing and Frank Warren’s Queensberry Promotions, tickets priced from $49 to $89 go on sale Friday, December 3 at 10 a.m. ET and can be purchased at the Turning Stone Resort Box Office, charge by phone by calling 800.771.7711 or online at Ticketmaster.

“Joe Smith Jr. always delivers, and he is in against a tough customer in Callum Johnson. This is a can’t-miss main event to kick off our 2022 Top Rank on ESPN schedule,” said Top Rank chairman Bob Arum. “Vivas is the ultimate test for a young, undefeated contender like Nova. Like our main event, you’re going to witness a tremendous battle.”

Smith (27-3, 21 KOs) retired the legendary Bernard Hopkins with a storybook knockout in 2015, but it took him nearly six years to capture a world title. He fell short in his first attempt versus Dmitry Bivol in 2019, but in 2020, big-fight opportunities knocked. Smith battered Jesse Hart over 10 rounds in January and then knocked out former world champion Eleider Alvarez through the ropes in August. Nearly eight months after the Alvarez triumph, he edged Maxim Vlasov by majority decision to earn the vacant WBO world title. He became the fourth Long Island-born boxing world champion, joining Buddy McGirt, Chris Algieri, and former WBO junior lightweight world champion Jamel Herring. After a full recovery, Smith returned to training intent on staking his claim as the world’s preeminent 175-pounder.

Smith said, “I am glad to be getting back into the ring as quickly as I am to defend my WBO world championship after having COVID. It is not the fight the fans or I expected, but this will be an explosive fight between two huge punchers. I look forward to facing Johnson and defending my belt in front of my fans, as well as putting on a great show for the ones watching at home.”

“Joe Smith Jr. is always exciting to watch, but this fight could top them all. This is ‘must-see TV’ and a perfect fight to launch ESPN’s 2022 boxing season,” said Joe DeGuardia, President of Star Boxing. “We are looking forward to Joe defending his WBO world title against Callum Johnson. With two of the hardest punchers in boxing fighting each other, it doesn’t get more explosive than this. Don’t miss this fight, and don’t blink!”

Johnson (20-1, 14 KOs) is a former British and Commonwealth light heavyweight champion riding a three-fight winning streak since a 2018 knockout loss to current WBC/IBF unified champion Artur Beterbiev. Johnson knocked Beterbiev down in the second round, but Beterbiev rebounded and knocked out Johnson in the fourth. Johnson, from Boston, England, shared the same bill with Smith at Turning Stone Resort Casino in March 2019. Johnson knocked out Sean Monaghan in three rounds, while Smith lost a decision to Bivol in a bid for the WBA light heavyweight title.

Johnson said, “Joe is a good world champion, and we’re both big punchers. I’m looking forward to it as much as I’m sure he will be. I also would like to thank Frank Warren and the team at Queensberry, who said they would deliver me a world title shot. They’ve done their job, and now it’s time for me to do my job in the ring and become the new WBO light heavyweight champion.”

“I’m delighted to deliver this opportunity for Callum,” said Hall of Fame Promoter Frank Warren. “When he came with us, he said he wanted to get active again and become a world champion. Callum has his chance now to realize his dream, and if he fights like I know he can, there is no reason why Britain won’t crown a new world champion on January 15.”

Nova (20-0, 14 KOs), world-ranked at junior lightweight, is now campaigning at featherweight. In June 2020, he turned away Avery Sparrow by unanimous decision, but in training camp for his next fight, he suffered a torn Achilles tendon. Nova was out of action more than a year and returned in August with an eight-round decision over Filipino veteran Richard Pumicpic. Vivas (21-1, 11 KOs) is a classic Mexican pressure fighter, a 27-year-old native of Texcoco who has won four in a row since a decision defeat to Ruben Villa. In October 2020, he needed only 76 seconds to knock out John Vincent Moralde. He returned in May and rose from a pair of third-round knockdowns to edge Louie Coria by unanimous decision.

Host of the January 15th event, Turning Stone Resort Casino is a Forbes Four-Star Award-winning destination resort, which continues to distinguish itself as a premier venue for fight-of-the-year caliber boxing. Turning Stone features world-class amenities including The Lounge with Caesars Sports, a state-of-the-art sports book in partnership with Caesars Entertainment, five hotels, more than 20 signature dining options, two spas, a 125,000 square foot Las Vegas style gaming floor, multiple entertainment venues, five golf courses, and several bars and lounges offering live entertainment every weekend. Additionally, Turning Stone is the Official Resort Casino of the International Boxing Hall of Fame Weekend. The partnership is a multifaceted initiative to spotlight boxing throughout the entire region. The program includes a series of boxing events at Turning Stone that culminate every year in June with an elaborate and bigger-than-ever International Boxing Hall of Fame Weekend celebration. International Boxing Hall of Fame Weekend will be held June 9 – 12, 2022.