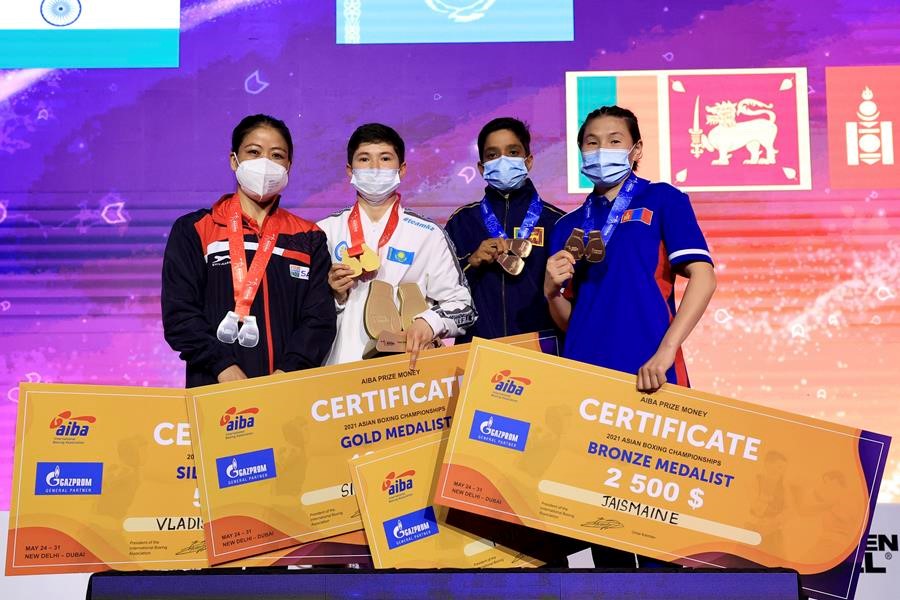 (May 31, 2021) – The exciting women’s finals were held in the sixth competition day at the ASBC Asian Men’s & Women’s Elite Boxing Championships in Dubai, the United Arab Emirates. Kazakhstan dominated the women’s finals, their boxers achieved eight gold medals out of the ten. Uzbekistan and India also achieved one title in Dubai, where Kazakhstan’s Nazym Kyzaibay defeated the legend of the world, Chungneijang Mary Kom Hmangte.

Altogether 150 boxers including 47 ladies are competing for the medals and money prizes at the ASBC Asian Men’s & Women’s Elite Boxing Championships. The money prizes of the competition for the gold, silver and bronze medallists were presented by AIBA Secretary General Mr. Istvan Kovacs of Hungary in Dubai.

AIBA allocates 400’000 USD prize money for Asian Boxing Championships. For the boxers who take first place, both men and women, the award is 10’000 USD. For the second, the prize money is 5’000 USD and for both bronze medalists it’s 2’500 USD each.

Kazakhstan’s Alua Balkybekova has done a revenge in the final

Uzbekistan’s Gulasal Sultonalieva was one of the heroes of the fourth competition day when she bowed out the reigning champion, Philippines’ Josie Gabuco in the semi-finals of the light flyweight (48kg). The 22-year-old Uzbek had nice memories about her final opponent, Kazakhstan’s Alua Balkybekova following Sultonalieva defeated her neighbouring rival at the Ulan-Ude 2019 AIBA Women’s World Boxing Championships. The younger Uzbek jumped in into the best fighting range and surprised Balkybekova with her quick attacks during the opening exchanges. The Kazakh boxer had more than 130 bouts during her career and tried to adopt the level of the contest using her longer reach in the first round. Balkybekova used the best fighting distance in their excellent final and she has done a revenge after their first meeting in Ulan-Ude.

India’s national boxing icon Chungneijang Mary Kom Hmangte arrived to Dubai to take her 6th Asian title. The six-time AIBA Women’s World Champion won almost all of her titles at the light flyweight (48kg) therefore she was going to win the gold medal of the flyweight (51kg) in Dubai. Mary Kom caught Kazakhstan’s two-time AIBA Women’s World Champion Nazym Kyzaibay with a tough punch during the opening of their final. The Indian star was smarter than in the semi-finals and she concentrated to her combinations better in the first round. Kyzaibay tried to follow her rhythm and came back to the contest with excellent jabs following she received the right advices in the first break. The Kazakh produced her best round in the third, when she controlled the fighting range and the exchanges therefore Kyzaibay stopped the Indian legend in Dubai.

Uzbekistan’s first and lone gold medal in the history of the ASBC Asian Women’s Boxing Championships was achieved by Guzal Ismatova in 2017 but the young boxer died earlier this year at the age of 25. Sitora Turdibekova claimed bronze medal in the AIBA Youth World Boxing Championships in Kielce this year and the 19-year-old talent gave in everything in the first round to surprise her Kazakh opponent, Vladislava Kukhta. The Uzbek talent moved more on feet than Kukhta in the first and second rounds during their impressive final at the featherweight (57kg). Turdibekova had strong motivation in the final and her successful counter-attacks were enough to beat the new Kazakh National Champion. Turdibekova is the second boxer from Uzbekistan after Guzal Ismatova, who could win an Asian woman title.

“I am very happy to win my first Asian Women’s Elite Boxing Championships. It was such a hard contest for me and this is the first gold medal for our team in the whole championships which made this success more unique. I dedicate this gold medal to my family and of course to the lovely Uzbek fans,” said Uzbekistan’s 19-year-old Sitora Turdibekova after her final contest.

Kazakhstan’s Rimma Volosenko won several international tournaments in the recent six years but she was unlucky with the major championships until today. The 29-year-old Kazakh controlled all of her contests at the women’s lightweight (60kg) in the ASBC Asian Elite Boxing Championships. Volosenko had amazing fighting spirit in the final against Indonesia’s Asian Games bronze medallist Huswatun Hasanah and she decided their contest very quickly. The experienced Kazakh landed lethal punches and the Croatian referee confirmed her KO triumph in the first round.

“I prepared a lot to achieve the gold medal in the ASBC Asian Elite Boxing Championships. The event is exciting and our team arrived in good shape to the event. We worked hard this year, that is the reason of our successes in Dubai. I am ready to compete in the next AIBA Women’s World Boxing Championships to reach my next goal,” claimed Kazakhstan’s Rimma Volosenko.

Kazakhstan’s Valentina Khalzova claimed gold medal at the Astana 2016 AIBA Women’s World Boxing Championships and silver at the Ho Chi Minh City 2017 ASBC Asian Women’s Elite Boxing Championships. The 25-year-old Kazakh returned to the national team in 2020 after a break and proved strong performance in the preparation tournaments this year. Khalzova overcame Uzbekistan’s promising Navbakhor Khamidova in the first round and she controlled also the second. Khamidova tried to surprise her Kazakh opponent in the third round with quicker jabs but Khalzova had the skills to win the welterweight (69kg).

India’s Pooja Rani claimed gold medal at the light heavyweight (81kg) in the Bangkok 2019 ASBC Asian Elite Boxing Championships and after that she moved down to the middleweight (75kg). Following Chungneijang Mary Kom Hmangte and Lalbuatsaihi lost their finals, India’s first gold medal in the championship was bagged by Pooja Rani. She was eight years older than her final opponent, Uzbekistan’s Mavluda Mavlonova and her experience decided the title bout of the middleweight (75kg).

“It is a fantastic feeling taking the Asian title at the second time after Bangkok, that is what I have been prepared for during last recent months. I never met with my Uzbek opponent previously but she defeated Kazakhstan’s Olympic Games bronze medallist Marina Volnova therefore I expected a tough battle. I believe that I was better today and deserved to win the gold medal,” said India’s first gold medallist in Dubai, Pooja Rani quickly after her final.

List of the winners of the women’s finals in Dubai

The ten men’s finals will be held in the last competition day of the ASBC Asian Elite Men’s and Women’s Boxing Championships in Dubai on Monday. The male finals will be starting in the Grand Ballroom of the Le Meridien Hotel on 31st of May at 6pm local time. Uzbekistan, Kazakhstan, Kyrgyzstan, Mongolia and Iran have the chance to achieve male titles in Dubai.