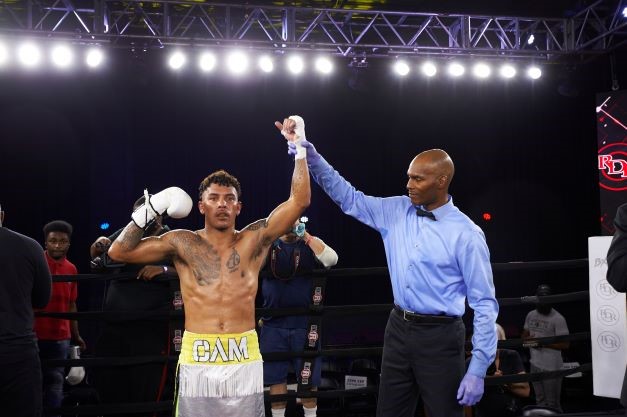 PHILADELPHIA PA (June 28, 2022)–Cameron Krael was very impressive in taking out Vincent Floyd in round four in their six-round middleweight bout that topped an action packed 10-bout card in front of a large audience at the 2300 Arena.

Krael of Las Vegas and Floyd of Philadelphia fought a nip-and-tuck battle that saw both fighters land flush throughout the bout. Krael was able to surge ahead and drop Floyd twice with body shots, and the fight was stopped at 2:51.

In what was the most anticipated battle of the night, Jabril Noble took out Nasir Mickens on round two of their six-round super featherweight bouts featuring Philly-based fighters.

Noble was dominant and showed flashes of being one of Philadelphia’s future prospects. The bout was stopped at 2:46.

Ofacio Falcon remained undefeated with a sixth round stoppage over Ken Porter in the final round of their super featherweight fight.

The fight was marred by Porter’s complaining of repeated low blows. The punches looked to be on the beltline. Falcon was deducted a point. Porter stayed down for five-minutes on three separate occasions. Finally he was deemed unable to continue at 2:26.

Tahmir Smalls remained undefeated with a vicious opening round stoppage over Roque Agustin Junco in a scheduled six-round welterweight bout.

Smalls ended things with a vicious left hook that sent Junco to the canvas, and the bout ended at 2:20.

Smalls of Philadelphia is now 8-0 with five knockouts. Junco of Argentina is 10-12-2.

The fight was stopped 28 seconds into round two for Adams of Philadelphia, who is now 3-0 with two knockouts. Benichou of Puebla, Mexico is 2-11-2.

Larry Fryers and Michael Crain fought to a four-round majority draw in a junior welterweight fight.

Karl Wylie made a successful pro debut with a four-round unanimous decision over Joshua Zimmerman in a lightweight bout.