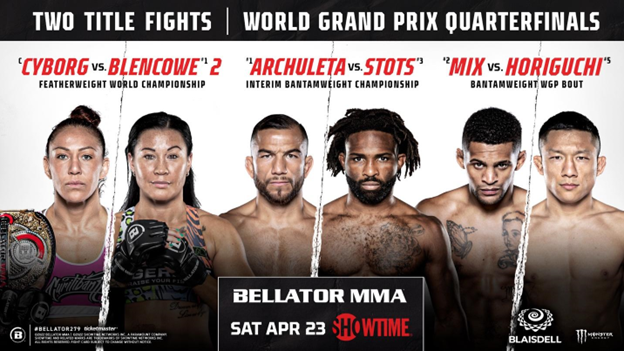 HONOLULU – (Thursday, April 21, 2022) – Ahead of a weekend overflowing with mixed martial artistry, fighters from BELLATOR MMA 279: Cyborg vs. Blencowe 2 / Archuleta vs. Stots spoke to the media today before their slated fights on Saturday, February 23 at the Neal S. Blaisdell Arena in Honolulu, Hawaii. The main card will air live on SHOWTIME at 10:30 p.m. ET/7:30 p.m. PT. The event is part of two back-to-back events BELLATOR is hosting in Honolulu – the first event being BELLATOR MMA 276: Velasquez vs. Carmouche one night prior on Friday, April 22.

A hard-hitting rematch will headline the Saturday card, as the greatest female MMA fighter of all time, Cris Cyborg (25-2, 1 NC) and No. 1-ranked female featherweight Arlene Blencowe (15-8) face each other in a BELLATOR Championship battle. Supporting the main event, No.1-ranked Juan Archuleta (25-3) will battle No.3-ranked Raufeon Stots (17-1) for the BELLATOR Interim Bantamweight World Championship. Additionally, the Bantamweight World Grand Prix will kick off with a tilt between No.2-ranked Patchy Mix (15-1) and No.5-ranked Kyoji Horiguchi (29-4). Rounding out the televised card, Hawaiian hometown favorite and No.1-ranked female flyweight Ilima-Lei Macfarlane (11-1) will fight Justine Kish (7-5).

Here’s what the BELLATOR 279 fighters had to say:

“Blencowe has been beating all the girls and she’s No. 1 in the division. I just have to be ready. She’s for sure going to be stronger than before. When you give somebody the rematch, you have to be prepared for any situation in the fight. I just feel ready and strong.

“For sure she has been focused on the rematch and has improved. I think I just have to do my game and focus on what I want to do in the fight. For sure I have to be careful of what my opponent is going to do but I will be ready for any situation in the fight.

“If anybody is an MMA fan, history has shown recently that major upsets are quite doable and achievable. Nobody would have thought that Julianna Peña would have beaten Amanda Nunes. She was a major underdog too and look what she came out and did. She shocked the world. As an Australian, we love being an underdog. There’s been some big fights in history. I have teammates that have shocked the world and I’m ready to do that. I let a moment slip by in 2020 when I had the first opportunity, and I’m grateful that I’ve got the second.

“I really do just have to be “Angerfist” and do what I do to my other opponents. Whenever I face somebody that’s ranked lower than me, I go out there and I’m aggressive because I want to cement my No. 1 ranking.

“Winning the belt would mean absolutely everything. That’s constantly what I keep reminding myself. When you talk about having to dig deep inside the cage and those gritty moments, that’s at the forefront. Winning the BELLATOR world title has eluded me for the past five years and it’s what I want. It would be everything I want in my career. There won’t be a bigger moment than winning the BELLATOR world title.”

“I think both of us are definitely willing to bring a fight. We’re two fan favorites who come in and fight. We’re definitely putting everything on the line to win this title for our families and win this Grand Prix. I’m expecting the best Raufeon come fight night and he better be expecting the best of me because I’m coming in and I know I’m walking away as the champ.

“He’s a bully. That’s all I have to say. He’s a guy that I definitely don’t want my kids or any of my family members looking up to because that’s the definition of a bully. In today’s day and age, too many people get away with running their mouth. Just like Mike Tyson had to beat the hell out of someone for pestering him, I’m going to do the same thing to Raufeon on fight night.”

“Juan feels like I’m picking on him or whatever. I saw that he called me a bully or something like that. That’s kind of what I want to do in the fight. I’m literally taking your lunch money at this fight. I’m going to be a bully in the fight. I’m not a bully in real life but that’s kind of how I’m approaching this fight. I feel like Juan Archuleta is mentally weak. He’s a strong individual but I want to take advantage of that, so I’ve been picking at him the whole fight camp. And in the fight, I’m going to continue to pick on him for five rounds.

“The fans are really excited to see me and Juan fight because we possess a lot of the same skills. He brings the action. I bring the action. We both have good cardio. We’re both good wrestlers and strikers. I think it’s a fun fight on paper.”

“This is the best. The previous BELLATOR Hawaii’s were awesome, but there was a lot of pressure. This BELLATOR Hawaii has been so chill. I don’t know if it’s because I’m not the main event or I’m not the champion anymore or maybe I’m just used to the process now and more comfortable with it, but it’s so chill. I could definitely handle fighting at home for the rest of my fight career if I have to if it’s like this.

“If all goes well on Saturday, I would like one more fight before the title shot. I’m actually keeping a very close eye on the Denise Kielholtz and Kana Watanabe fight on the London card. I’m keeping my eye on that fight because I think the winner of that fight and the winner of this fight, if it’s me, are the top contenders. That fight between us would be for the title shot.”

“In all honesty, I was like ‘how in the world am I getting this opportunity?’ I have three losses in a row. What is happening here? I called people I’m really close to and I realized, oh my god, I think I just became a tomato can. That doesn’t sit well with me. I grew up in combat sports as the star of the show. Things have turned around. This isn’t me. I’m doing everything I can in my training to show the audience the kind of performance I really want to give out there.

“I’m very excited for this fight because I’m coming off a loss. I want to pay it back. It’s okay that I lost. It’s a fight. I’m okay. My mentality is the same. Always focused. I want to get back on top. Losses are frustrating, no doubt. I will be back.

“Patchy is a very good fighter. He has good grappling. He has other good advantages, too. He’s tall and long. He’s a good fighter.

“I talk with Danny Sabatello all the time about the tournament. We train together all the time. We joke around a lot about the fact that we’re both in the Grand Prix. I believe that I will see him in the final. I think so. He’s a good fighter, too.”

“I one hundred percent want the rematch with Juan Archuleta. I want that one back, one thousand percent. One million percent. I’m going to be in the tournament and I’m coming, all gas no breaks. I’m a championship greyhound bus and I’m driving fast. I’m trying to run Horiguchi over and get to the finals and get that one back.”