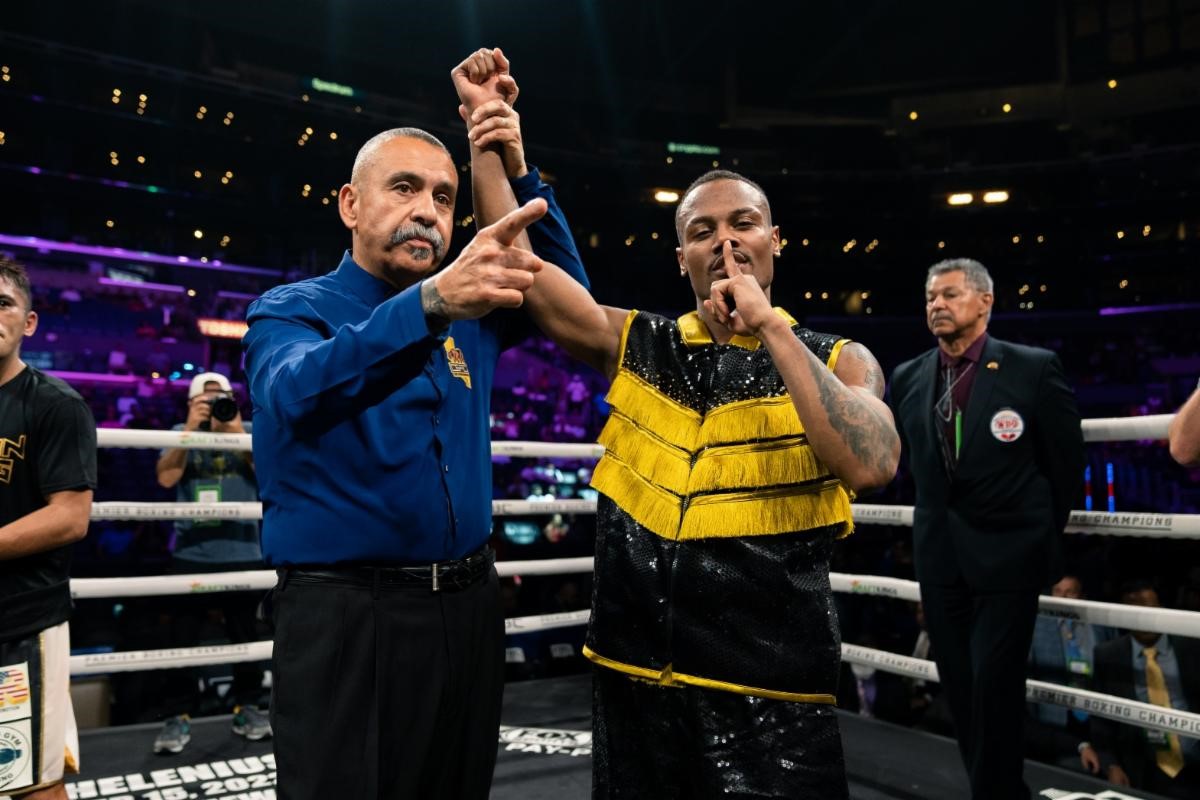 LAS VEGAS, NV (September 7, 2022) – After an impressive performance this past Sunday, Ra’eese “The Beast” Aleem (20-0, 12 KOs), lived up to his moniker as he clearly defeated “Magic” Mike Plania (26-2, 13 KOs), via a ten-round dominate unanimous decision, in a manner unlike any fighter had prior. Aleem ended Plania’s 11-fight winning streak on the undercard of Andy Ruiz Jr. vs. Luis Ortiz, a PBC on FS1 event.

It is clear Aleem wants unified super bantamweight champion, Stephen Fulton (21-0, 8 KOs), as he stated this after the fight. Aleem has earned the right to fight Fulton, and a shot at a world title, and here is why.

Aleem is currently ranked #4 in the world according to BoxRec.com, and #2 in the United States behind Fulton by that same rating metric. Aleem also won a bout that made him WBO NABO champion, improving his ranking in the WBO 122 lbs. division, a division in which Fulton is the champion. Aleem previously was the #1 contender in the WBA world rankings as well.

An Easy Fight to Make

Furthermore, Aleem is undefeated in twenty professional fights with twelve wins by way of knockout, having fought several times on Showtime, the same network that Fulton won his world title on. In addition, the fight is very easy to make since all the parties involved have all fought under the PBC banner.

“I wish the politics of boxing didn’t play such a big role in the sport, but it does and Murodjon Akhmadaliev, the other unified champion in the division, is on the other side of the fence with another network,” said Aleem. “I fight on Showtime and have fought on this network several times, including on the same fight cards as Stephen Fulton. I have served as a co-main event to his headlining bouts on two different occasions. I know fight fans really want to see this fight, especially after my last performance on Sunday. Now I just need the media to demand it.”

No Other Fighter Makes Sense for Fulton Right Now

No other fighter is available as Luis Nery, the #1 contender to face Fulton, is scheduled for a fight soon, and Akhmadaliev is looking to make a world title defense, along with network politics getting in the way of that fight.

In terms of a fight in the United States, no other fight for Fulton offers the anticipation as Ra’eese Aleem. Aleem is getting fans, and even veteran broadcasters like Al Bernstein, wondering what would happen if the two were to fight.

“We both fight on PBC, either he vacates, or he fights me, it is really simple,” said Aleem with frustration. “I think it’s funny he’s using that language, sounds like he’s deflecting, maybe he is scared to fight, in response to veteran broadcaster Al Bernstein’s tweet. I have never been one to trash-talk anyone, but it appears Fulton has a lot of nervous energy around this fight, and is lashing out at people who are excited by this potential match-up. People consider him the best fighter in the super bantamweight division, which is why I want to fight, because I believe I can beat him. This is a big money fight for both of us, and he should embrace it, instead he’s being spineless with his responses.”

Aleem has waited for years for a title shot as he battled his way up from the club circuit, onto television, to get his chance to face the best. Aleem is a former WBA #1 contender who has faced faced five consecutive tough opponents.

Those opponents include:
• Mike Plania, who was coming in on an eleven-fight winning streak.
• Eduardo Baez, who would face Emanuel Navarrete in his next fight, and give him a hard fight as well.
• Vic Pasillas, who was undefeated at the time, and being touted by veteran broadcasters as a future world champion.
• Marcus Bates, a fighter who Aleem defeated to take his undefeated record, who he faced in a televised rematch, and was victorious a second time.
• Adam Lopez was a tough contender who never fought again after being stopped by Aleem.

Aleem earned his position in the sport by fighting the toughest opponents he could face without backing down from a challenge. Aleem never turned down and opponent and dominated fights against elite competition on numerous occasions, including his last performance on Sunday. Each of Aleem’s televised fights has seen him improve into the world title challenger that he rightfully is today.

“I am motivated by the fans, broadcasters, and media members who are demanding to see this fight,” concluded Aleem. “Hearing the public say it, and the way he is behaving makes it clear, I am Stephen Fulton’s biggest threat in the division. In today’s world, we need the greatest fighters to chase glory, and see who is truly the best. I am tired of boxing being a second-tier sport that is ignored because we neglect the fans from getting the fights they want to see. I want to make the best fights possible but Fulton is running scared. Let’s be honest, it makes no sense for either of us to fight anyone else at this point. I rise to the occasion every time I step in the ring, and this will be no different. If given the chance I will be the man to beat Stephen Fulton.”