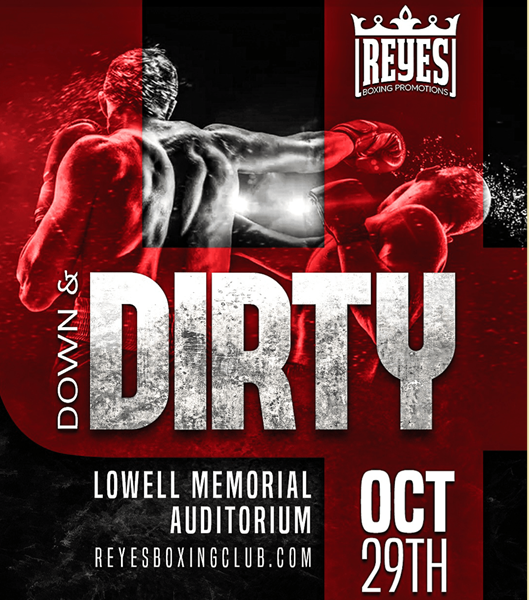 Melrose, MA (October 19, 2022) – Reyes Boxing Promotions will host “Down and Dirty 4” Saturday, October 29 at the Lowell Auditorium in Lowell, MA.

Tickets from $40 are on sale at shorturl.at/GINP3. Those unable to attend can watch the card live on Reyes Boxing TV for $9.99.

Doors open at 3 pm and the first fight begins at 4.

With a total of 15 fights featuring boxers from Massachusetts, New Hampshire, Florida, Missouri, Louisiana, Colombia, Brazil, Argentina Venezuela and Paraguay, Reyes Boxing Promotions is providing an opportunity for fighters from
all over.

Headlining is a six round junior lightweight contest between Massachusetts natives Gabriel Morales, 4-0 (3 KO’s) of Lowell and Lawrence’s Kevin Rodriguez, 3-1 (2 KO’s). Both are popular local fighters and the winner takes home the ABF Atlantic 130 pound championship.

2012 Olympic Bronze Medalist Yamaguchi “The Problem” Falcao defends his NABA and WBC Latino super middleweight titles against Alex Tehran in a ten round tilt. Falcao’s outstanding professional record is 22-1 with 9 knockouts. He’s won all three of his fights in 2022 and looks to close out the year in style. Tehran, 23-8 (15 KO’s) faced some of boxing’s best and defeated contender Adama Osumanu in 2021.

In a six round junior welterweight battle, Brazil’s Willian “Babyface” Silva squares off against Carlos Suarez of Argentina. Silva, 28-4 (16 KO’s), looks to make a run at 135 pounds if victorious. Suarez, 8-8-3 (4 KO’s), faced two of boxing’s pound for pound stars in Murodjon “MJ” Akhmadaliev and Shakur Stevenson.

Falcao and Silva are promoted by Fire Fist Boxing Promotions.

Junior welterweight Marqus Bates faces once-beaten Jonathan Montrel in a eight round contest for the ABF 140 pound championship. Born and raised in Taunton, MA, Bates’ 11-4 with 8 KO’s as a pro. He’s riding a four fight win streak, three of which came by knockout. Hailing from New Orleans, LA, Montrel’s an excellent 13-1 with 8 KO’s. He’s fought most of his career in Louisiana but is coming to Massachusetts with supreme confidence.

“We’ve got a nice mix of local boxers and international talent on this card,” said Michael Reyes. “Fans will be in for a full day of fights with 15 bouts currently scheduled. Lowell has a great boxing history and is of course known as the hometown of Micky Ward. I’m looking forward to the first of what is hopefully many cards in Lowell under the Reyes Boxing banner.”