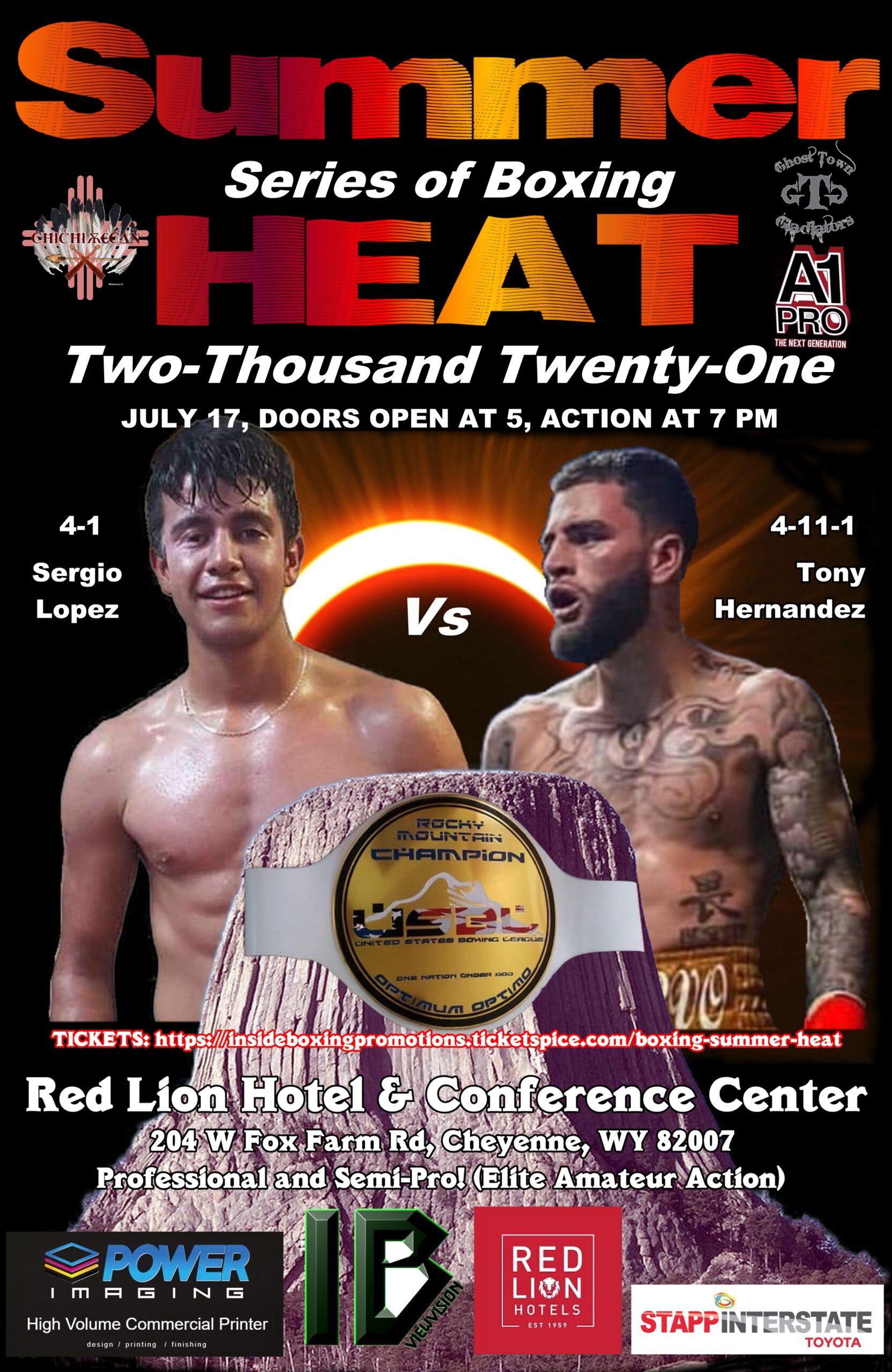 CHEYENNE (July 9, 2021) – Chichimecan Combat Sports and Entertainment presents a Major boxing event on Saturday, July 17th at the Red Lion Hotel & Conference Center, Cheyenne, Wyoming. This spectacular is part of the annual ‘Summer Heat’ Series of Boxing and will be streamed broadcasted on IBtv “ViewVision’. The card is stacked! Take a look at one of the featured contests:

Sergio Lopez (4-1) from Parral, Chihuahua, fighting out of Denver, Colorado Mexico fighting in his 6th professional contest when he greets Kansa City boxer Antonio Hernandez (4-11-1). This bout you don’t want to miss! Hernandez is a youngster of 21 years of age and has been active like the Flash, his ring experience of 16 battles has paid off. In Hernandez’ last contests, he has defeated an undefeated Destyne Butler (9-0) and upset Gorjan Slaveski who came into the fight with a record of 6 wins to one loss.

The other side of the equation we have Lopez with 5 professional contests to his name, ready and willing to make a statement and advance his career. This contest may only be Lopez’ sixth professional fight but make no mistake, he no stranger to the squared circle. Lopez had an extensive amateur career in Mexico winning numerous amateur championships including the coveted Mexican Nationals.

“We sleep no one, we know what Antonio brings to the table and we know what we bring to the table. Every opponent that steps into the ring opposite Sergio is an obstacle in our way and we must clear the path if we are to meet our goal and become a world champion someday.” -Team Lopez

This contest very well may end up fight of the night! You can purchase and select your seats at https://insideboxingpromotions.ticketspice.com/boxing-summer-heat or catch the action on IBtv Viewvision https://ibtv.us

The “Amazing” Shawn Mccalman, (Aurora, CO) is undefeated in 7 fights will take on Vaughn Alexander (Saint Louis, Missouri) sporting a professional ring record of 15-5. The contest will be for the ABF American West Super Middleweight Championship.

Heavyweights! Everyone loves the big pugilist, Russian-born [Tbilisi, Georgia] Mikheil Bakhidze will face Terrell Jamal Woods from Forrest City, Arkansas in a 6-round contest. Woods brings experience into the ring, with 81 fights under his belt and a ring record of 24-48-9 and at only 31 years old. Compared this with the three professional bouts Bakhidze has. However, Bakhidze had an extensive amateur career, this being the ‘Equalizer. 24-48-9. These boxers are not only talented but massive, Bakhidze stands at 6’3.5” while Woods is 6’3”

3-time Amateur champion Jesus Vasquez Jr. boasts a professional record of 8-1, he’ll be stepping up his game in the professional rankings on this card. Vasquez will face Jose Antonio Martinez from Chalchihuites, Zacatecas, Mexico a boxer with 35 pro fights to his name (11-24). Martinez has been in the ring with highly talented and promising boxers including World Champion Ryan Garcia.

A Super Middleweight contest between Javier Aragon from Parral, Chihuahua, Mexico (3-0-1) and Isaac Johnson, Colorado Springs, CO (2-8-1) should prove to be exciting and action-packed. Two heavy hitters in this one, you don’t want to blink on this one.

Fan favorites and outstanding amateurs Ramiro Figueroa and Armando Mercado will be making the transition into the professional rankings. Say goodbye to the amateurs and welcome to the pros!

The card is being promoted by Chichimecan Combat Sports and Entertainment, Ghost Town Gladiators and A1Pro, The New Generation