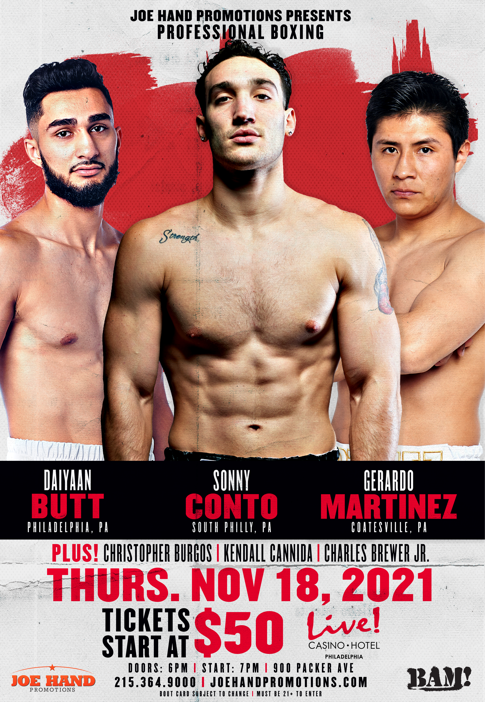 PHILADELPHIA (October 7, 2021)—South Philadelphia heavyweight fighter Sonny Conto (7-0, 6KOs) will put his impressive undefeated streak on the line and make history when he enters the boxing ring at the new Live! Casino & Hotel in Philadelphia, a mere couple miles from his home, on Thursday, November 18 at 7 p.m. It will be the first live boxing event at the newly-opened 1,000 plus seat Live! Event Center. Conto will face Ed Fountain (12-8, 5 K0s) of St. Louis, MO in a six round heavyweight fight.

Also highlighted on the card will be Philadelphia welterweight Daiyaan Butt (8-1, 4K0s) in a six-round bout against an opponent to be announced.

There will feature a five round light heavyweight fight between Kendall Cannida (3-1, 1K0) of Philadelphia, PA against Khainell Wheeler (5-1, 5 K0s) of Bethlehem, PA.