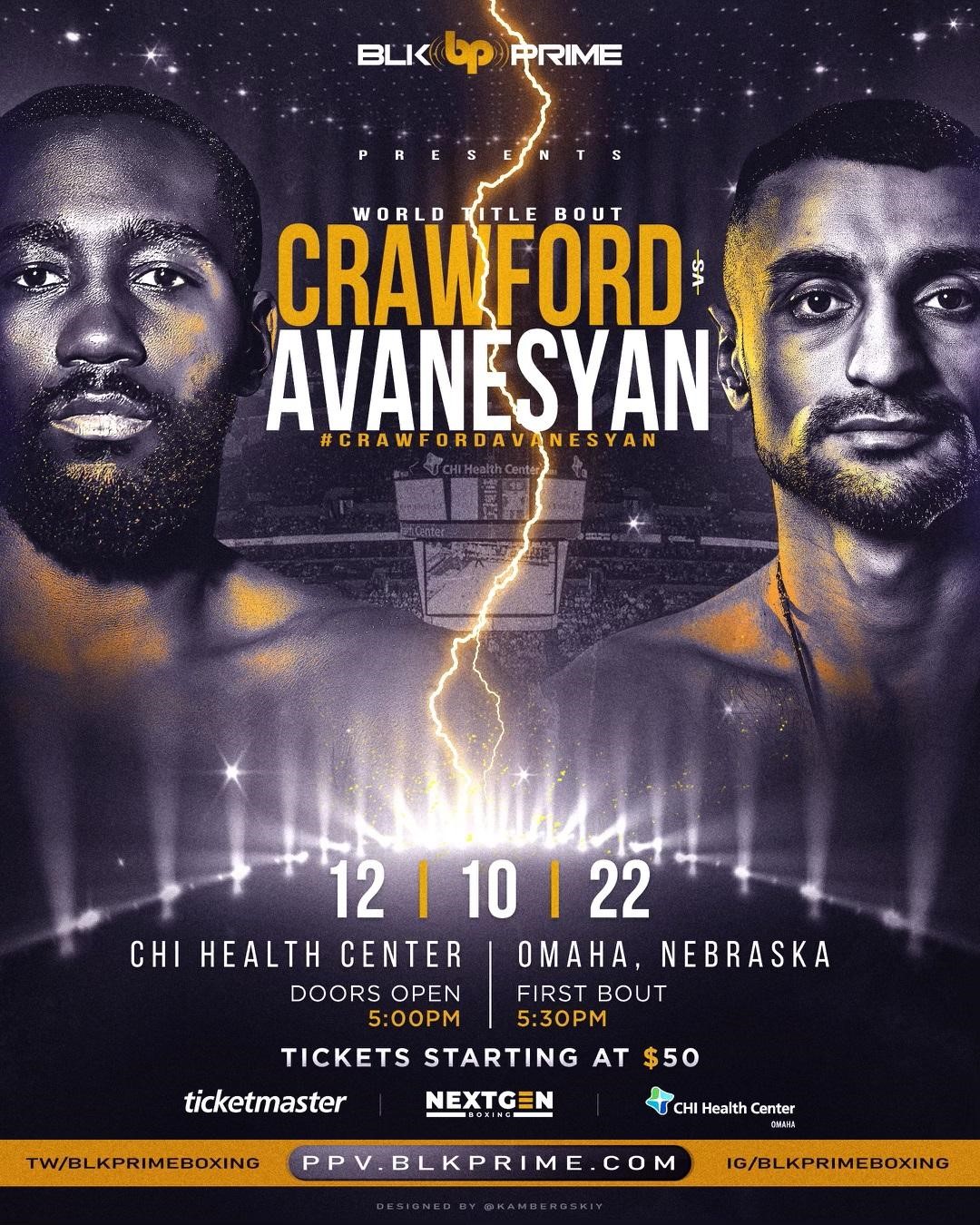 COLORADO SPRINGS, Colo. (November 4, 2022) – Welterweight superstar and current pound-for-pound king, Terence “Bud” Crawford (38-0, 29 KOs) will make his triumphant return to the ring when he battles WBO #6 ranked David Avanesyan (29-3-1, 17 KOs) at the CHI Health Center in Omaha, Neb. on December 10, 2022. The 12-round bout will air live on BLK Prime PPV, with Crawford’s WBO welterweight title on the line.

“We have seen player empowerment movements in other sports, and now we are starting to see it in boxing,” said Crawford. “I have taken control of my career and my December 10 fight on BLK Prime is the start of my next chapter.”

Crawford chose to bring his latest world title fight back to his hometown of Omaha, Neb. He hasn’t fought in front of the always raucous Nebraska crowd since a TKO victory over Jose Benavidez in October of 2018. “My hometown fans deserve another big fight, and we are going to pack the CHI Health Center once again on December 10.”

Crawford is looking to extend his nine-fight knockout streak, one that has gone under-appreciated from boxing fans and media. December 10 will mark Crawford’s sixth defense of his WBO welterweight title and his 17th straight world title fight across three weight divisions.

“I am an exciting fighter and the best closer in the sport. I have knocked out every fighter I have faced since 2016,” continued Crawford. “I’m going to put on another entertaining fight on December 10 and continue my knockout streak. David Avanesyan is a tough opponent who is riding a strong knockout streak of his own. He’s upset some really good fighters and has nothing to lose. That makes for something that the fans will want to see.”

A former WBA interim champion, Avanesyan enters this welterweight title bout on a six-fight stoppage streak dating back to 2019, when he captured the European welterweight championship. He defended that title five times before he recently decided to vacate and challenge Crawford for his WBO crown. Considered by many boxing connoisseurs as a legitimate welterweight contender, Avanesyan is ranked top ten by three of the recognized sanctioning organizations. His will to keep his winning streak intact is not to be discarded and will certainly bring forth an entertaining fight.

Crawford vs. Avanesyan, a 12-round WBO welterweight world title clash, will stream live on BLK Prime for the price of $39.99. BLK Prime, a Silicon Valley-based tech company, is a subscription video on demand platform that utilizes elite technology to bring the best picture-perfect stream available. Telecast will begin at 9 p.m. ET / 6 p.m. PT.