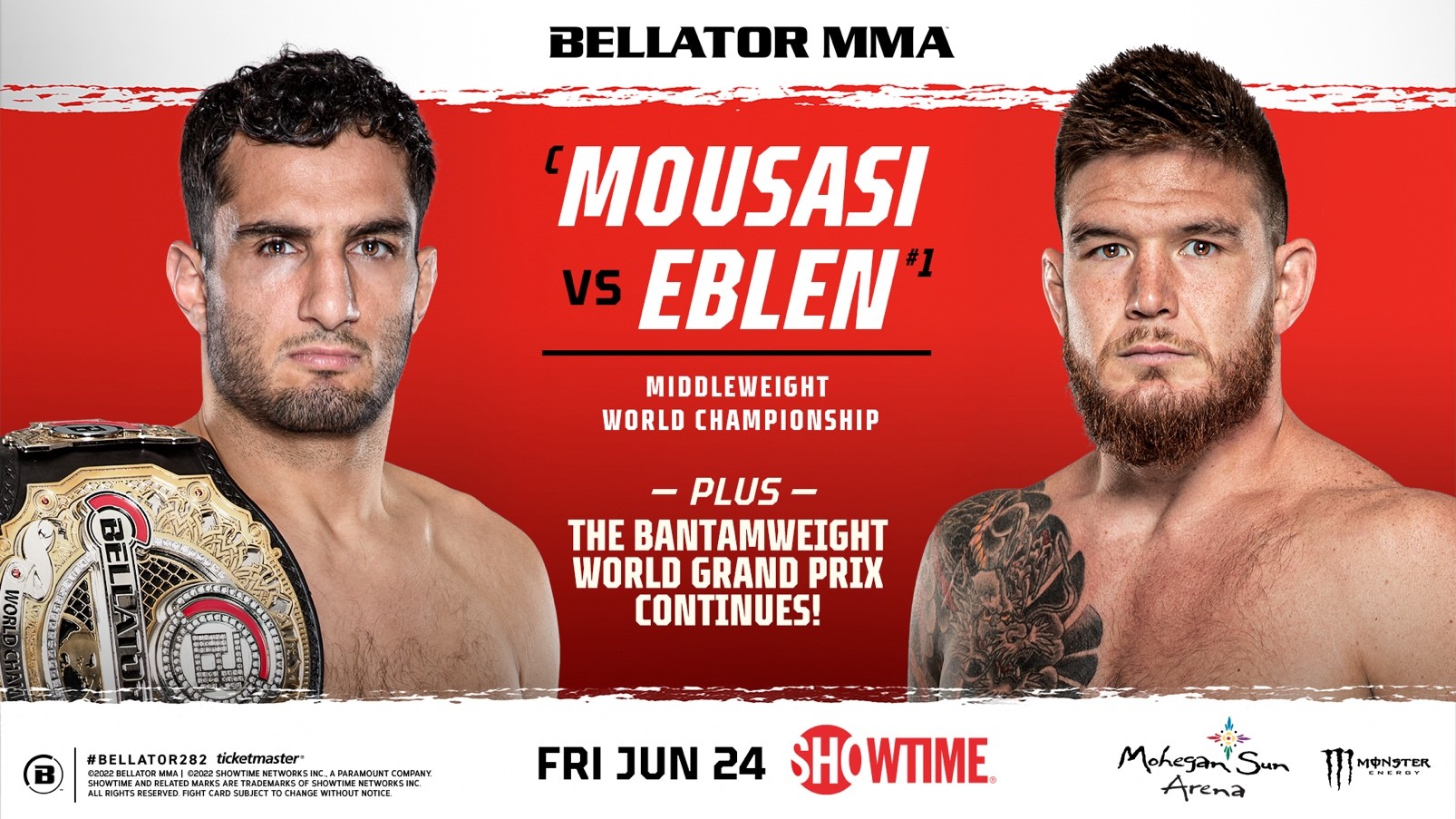 LOS ANGELES – BELLATOR MMA will continue its stirring streak of impressive fight cards with a Middleweight World Championship and two Bantamweight Grand Prix quarterfinal combats. For the main event, No. 4-ranked pound-for-pound fighter Gegard Mousasi (49-7-2) will defend his BELLATOR Middleweight World Championship against No. 1-ranked Johnny Eblen (11-0), who’s fresh off his massive victory over previously No. 1-ranked John Salter this past March. The fights will be hosted at the Mohegan Sun Arena on Friday, June 24, at 9 p.m. ET/6 p.m. PT, and airing live on SHOWTIME.

In addition, fight fans can expect a captivating, supporting televised card for BELLATOR 282: Mousasi vs. Eblen with the remaining two Bantamweight World Grand Prix quarterfinal matchups featuring Magomed “Tiger” Magomedov (18-2-0) and Leandro “Pitbull” Higo (21-5-0). The opponents for both men will be determined by a pair of Wild Card bouts set to take place at BELLATOR 278 on Friday, April 22. Magomedov will take on the winner of the fight between Enrique Barzola (17-5-2) and No. 8-ranked Josh Hill (21-4), while Leandro Higo awaits the winner of the bout between No. 9-ranked Jornel Lugo (8-0) and Danny Sabatello (11-1). These fighters will be looking to advance in the tournament with their sights set on winning the BELLATOR MMA Bantamweight World Grand Prix, along with taking home the interim world title and a cool $1 million check.

Tickets for BELLATOR MMA 282: Mousasi vs. Eblen go on sale Friday, April 1 at both Ticketmaster.com and Bellator.com with a special presale starting the two days prior.

A fantastic female flyweight fight between former title challenger and No. 5-ranked Alejandra Lara (9-5) and Team Pitbull’s Ilara Joanne (9-6) has been announced for the preliminary card, which will stream live on the BELLATOR MMA YouTube channel, SHOWTIME Sports YouTube channel and Pluto TV beginning at 6 p.m. ET/3 p.m. PT.

Given a body of work that spans nearly twenty years and sixty fights, Mousasi is widely considered one of the very best fighters of all time. Having competed in multiple weight classes from welterweight all the way up to super heavyweight, Mousasi has asserted his dominance against all comers.  A two-time BELLATOR MMA Middleweight World Champion, Mousasi enjoyed his first reign as the promotion’s 185-pound king dating back to 2018, winning the title against Rafael Carvalho and defending it against Rory MacDonald. The Dutchman reclaimed his title in a dominant performance over Douglas Lima, who held the welterweight championship at the time, before adding dominant, successful TKO title defenses against John Salter and Austin Vanderford, both of whom were ranked no. 1 at the time of their fights. Now, Mousasi will look to defend his reign against a third straight no. 1 contender in a very hungry Johnny Eblen.

A rising name amongst the BELLATOR MMA stable, currently No.1-ranked Johnny Eblen has impressed MMA-fandom with his ability to find the “cheat code” to take down all his opponents. With 11 pro fights under his belt, Eblen jumped in rankings when he beat previously No.1-ranked John Salter on March 12. Other notable finishes include conquering Daniel Madrid via first round TKO at Bellator 258 and Colin Huckbody via strikes in 71 seconds at Bellator 272. Eblen, who trains at American Top Team in South Florida, has “King Mo” Lawal among his coaches and will look to him for the blueprint as he is one of very few men to defeat Mousasi.