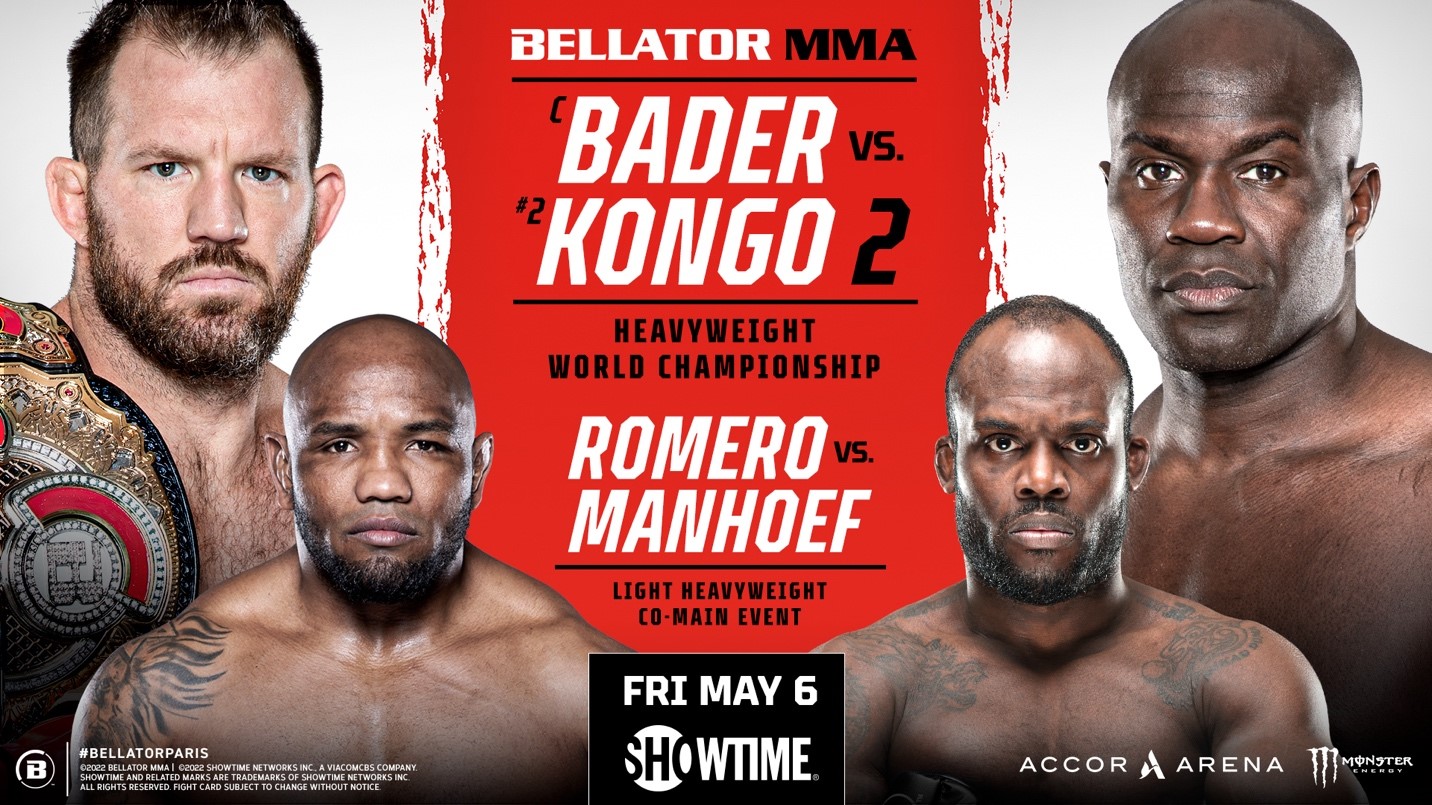 PARIS, FRANCE – Two iconic mixed martial artists with an undeniable track record of thrilling performances will square up as Yoel Romero (13-6) takes on Melvin Manhoef (32-15-1, 2 NC) in the co-main event of BELLATOR MMA’s return to Paris’ Accor Arena on Friday, May 6. BELLATOR PARIS: Bader vs. Kongo 2 will be televised live in America on SHOWTIME at 10 p.m. CEST/4 p.m. ET.

With mixed martial arts becoming legalized in France in 2020, BELLATOR became the first promotion to hold a major MMA event with BELLATOR 248 in October of that year. The success of that historic card propelled BELLATOR to make a return to “The City of Lights” in 2022 in a big way with a main event featuring undisputed BELLATOR MMA Heavyweight Champion, Ryan Bader (29-7, 1 NC) defending his crown in enemy territory against hometown favorite and No. 2-ranked heavyweight Cheick Kongo (31-11-2, 1 NC).

In addition to the main and co-main event, a lightweight tilt pitting the last man to defeat media darling Paddy Pimblett, Søren Bak (15-1) against England’s Saul Rogers (15-4) is also official. Bak has only tasted defeat once in his 16 professional fights and held both the featherweight and lightweight titles in Cage Warriors before joining the BELLATOR roster. Fighting out of Denmark, “The True Viking” is riding a seven-fight win streak into battle against the SBG Manchester product, Rogers. Known as “The Hangman,” Rogers also has amassed 15 victories on his resume including wins over Artem Lobov, Ryan Hall and Georgi Karakhanyan.

The preliminary card is guaranteed to feature a showcase of French talent and has begun to take shape with the return of Yves Landu (16-9), who takes on Liverpool’s Gavin Hughes (10-2) in a lightweight affair. Preliminary card action will stream live on the BELLATOR MMA YouTube channel, SHOWTIME Sports YouTube channel and Pluto TV beginning at 6:30 p.m. CEST/12:30 p.m. ET.

Fighting out of Miami, Florida, Romero will be making his second BELLATOR appearance on May 6 in Paris. Following a seven-year stint under the direction of the UFC, the American Top Team-product became one of the most sought-after free agents prior to signing with the Scott Coker-led promotion in 2020. With 11 of his 13 career victories coming by way of knockout, including four of the first-round variety, “Soldier of God” possesses the type of knockout power that can force any opponent into submission. A three-time World Cup Freestyle Wrestling Champion, five-time Pan-American Freestyle Wrestling Champion, and 2000 Olympics Freestyle Wrestling Silver Medalist, the Cuban-born Romero has continuously showcased his elite talents at the highest level of competition. The only missing trophy to a near-flawless legacy is a BELLATOR world title.

Making his tenth appearance for BELLATOR MMA, Dutch superstar Melvin “No Mercy” Manhoef has put together an impressive resume throughout his illustrious career in multiple combat sports disciplines that has seen him finish 29 of his 32 MMA victims via knockout, including 26 in the first round and eight in the opening minute of action. A native of Amsterdam, Netherlands, the ageless wonder and No. 10-ranked BELLATOR light heavyweight will now look to add to a trio of impressive knockouts that he’s collected since joining the promotion back in 2014.