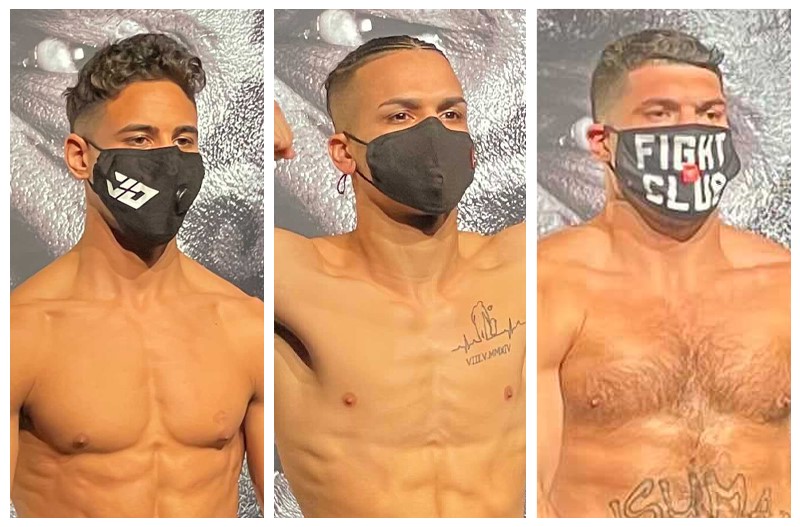 Ortiz, Gonzalez, and Cusumano all ripped and ready for action

Los Angeles, CA (Nov. 27, 2020) – Three of CES Boxing’s rising stars are primed and ready to chase championship glory tomorrow night on one of the most highly-anticipated nights in the sport’s recent history.

With pound-for-pound legends Mike Tyson and Roy Jones Jr. set to face one another Saturday at The Staples Center for the WBC Frontline Title, Worcester, MA natives Jamaine Ortiz, and Irvin Gonzalez Jr., and Italian heavyweight Juiseppe Cusumano each aim for titles of their own on the undercard of a star-studded pay-per-view extravaganza.

The festivities, presented by Triller and Tyson’s Legends Only League, begin at 5 pm ET with a free hour of live boxing before the start of the pay-per-view main card at 6. You can stream the entire event for $49.99 via FITE.tv or through the Triller app.

Gonzalez’s showdown with undefeated featherweight prospect Edward Vazquez of Fort Worth, TX, for the vacant WBC USNBC title will be featured in the free 5 o’clock hour while Ortiz’s highly-anticipated battle against Maryland’s Sulaiman Segawa for the USNBC Silver lightweight crown airs during the pay-per-view portion of the card beginning at 6. Also on Saturday, Cusumano fights for the vacant USNBC heavyweight title against hard-hitting Greg Corbin of Dallas.

Friday’s official weigh-in kicked off the pre-fight festivities, highlighted by the long-awaited faceoff between the 54-year-old Tyson and the 51-year-old Jones, two larger-than-life talents finally going toe-to-toe decades after dominating the sport during the rise of the pay-per-view era.