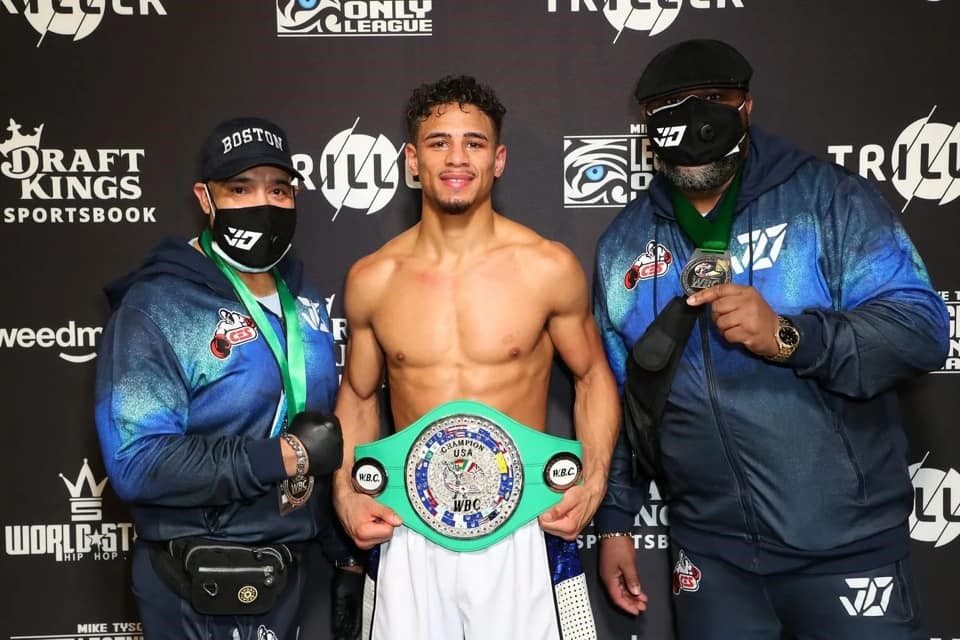 Providence, RI (December 10) – Jamaine Ortiz doesn’t care who he fights next, nor is he specific in terms of calling out potential opponents in the 135-pound weight class.

Anyone with a belt will do.

“For me, it’s about winning a title,” said Ortiz, the reigning, undefeated WBC World Youth and USNBC Silver lightweight champion promoted by CES Boxing. “I would love to fight Devin Haney, [Gervonta] Davis, [George] Kambosos – whoever is at the top. I’ve been staying ready. I’m anxious to fight.”

The 25-year-old Ortiz recently returned to his hometown of Worcester, MA, after spending five weeks in California helping pound-for-pound great Vasiliy Lomachenko prepare for his Saturday-night showdown against Richard Commey. The 3,000-mile trip to Camarillo proved worthwhile on two fronts: It kept Ortiz sharp, plus it reaffirmed what he’s believed since Day 1 – that he’s one of the best in the sport capable of competing with anyone the lightweight division.

“I don’t necessarily need that validation,” Ortiz said, “but being there and going toe-to-toe with Lomachenko in sparring definitely felt like a confirmation for me. I’ve always known what I’m capable of doing. I know I belong in the ring with those guys. My work ethic shows whenever I walk into a room. Nobody trains the way I do.

“Sparring [with Lomachenko] went very, very well for,” Ortiz continued. “Lomachenko is a great fight, but the things he does, he wouldn’t be able to do that to me. I move different. When that bell rings, everything comes into play. I’m bigger, stronger, I have a high fight IQ – I am confident in what I can do once I step into that ring.”

Ortiz hasn’t fought since April when he battled fellow unbeaten lightweight Joseph Adorno to a draw in a back-and-forth thriller on ESPN in which Ortiz hit the canvas twice – once in the second, and again in the seventh round. Judges Rodolfo Aguilar and Brian Garry scored it 75-75 while Efrain Lebron judged in favor of Ortiz, 76-74; the seventh-round knockdown cost Ortiz what would’ve been a unanimous decision win.

Despite the minor blemish on his record – he is now 14-0-1, snapping his streak of 14 consecutive wins to start his pro career – Ortiz proved that night he can compete on the sport’s biggest stage against some of its brightest stars, and the scores proved he dominated the fight outside of the two knockdowns.

The fight also continued to boost Ortiz’s rapidly-rising stock. Soft-spoken and stoic by nature, Ortiz for years has flown under the radar in discussions about boxing’s best 135-pounders. In November of 2020, he opened the pay-per-view portion of the Mike Tyson-Roy Jones Jr. and electrified social media with a knockout win over Sulaiman Segawa. Ortiz’s followers on multiple platforms more than doubled overnight with many in the boxing world getting their first real glimpse of CES’ blossoming talent.

Since then, Ortiz has gone from being a “name to watch” at 135 pounds to a now legitimate contender during what is currently considered a renaissance period in the lightweight division. The best part? The division is highly competitive, as evident by Kambosos’ recent win over Teofimo Lopez for the WBA, IBF, and WBO titles – only 13 months after Lopez upended Lomachenko to capture the belts.

“I was a little surprised,” Ortiz said of Kambosos’ win over Lopez. “But he had it coming. The way his father went after Kambosos’ father at the open workout, the way he called Kambosos a ‘one-day wonder,’ everything they said would happen to Kambosos happened to them.”

With titles changing hands so rapidly, there’s no reason to believe Ortiz can’t add one (or two) to his trophy case within the next year.

“As long as guys continue to fight who they should be fighting, that trend will continue,” Ortiz said. “That’s what makes this division in this era so great. Twenty years from now, they’ll be talking about this period in the lightweight division the way they talked about welterweights in the early ‘80s with Sugar Ray Leonard and Roberto Duran. Our division is on fire right now.”

With 2022 on the horizon, Ortiz is expecting this to be his biggest year yet. The pandemic, coupled with a few nagging, reoccurring injuries, has limited him to just three fights over the past two years. Having just completed a grueling, yet productive, training camp with boxing’s former pound-for-pound king, Ortiz is sharp as ever and ready to hit the ground running in January.

He’ll be watching Lomachenko-Commey this weekend, patiently waiting for his opportunity to step onto that same stage.

“The goal is to get back on television and move closer to a world title,” Ortiz said. “I’m an entertaining fighter. Always have been. There’s nothing boring about my style.

“Once I get to where I need to be, it’s my job to perform, and you can be assured I will come out with the ‘W.’ the fans will follow. I’m there to win, perform, and put on a show. That’s what the fans like, and that’s why I have the following I do. This is going to be a big year.”