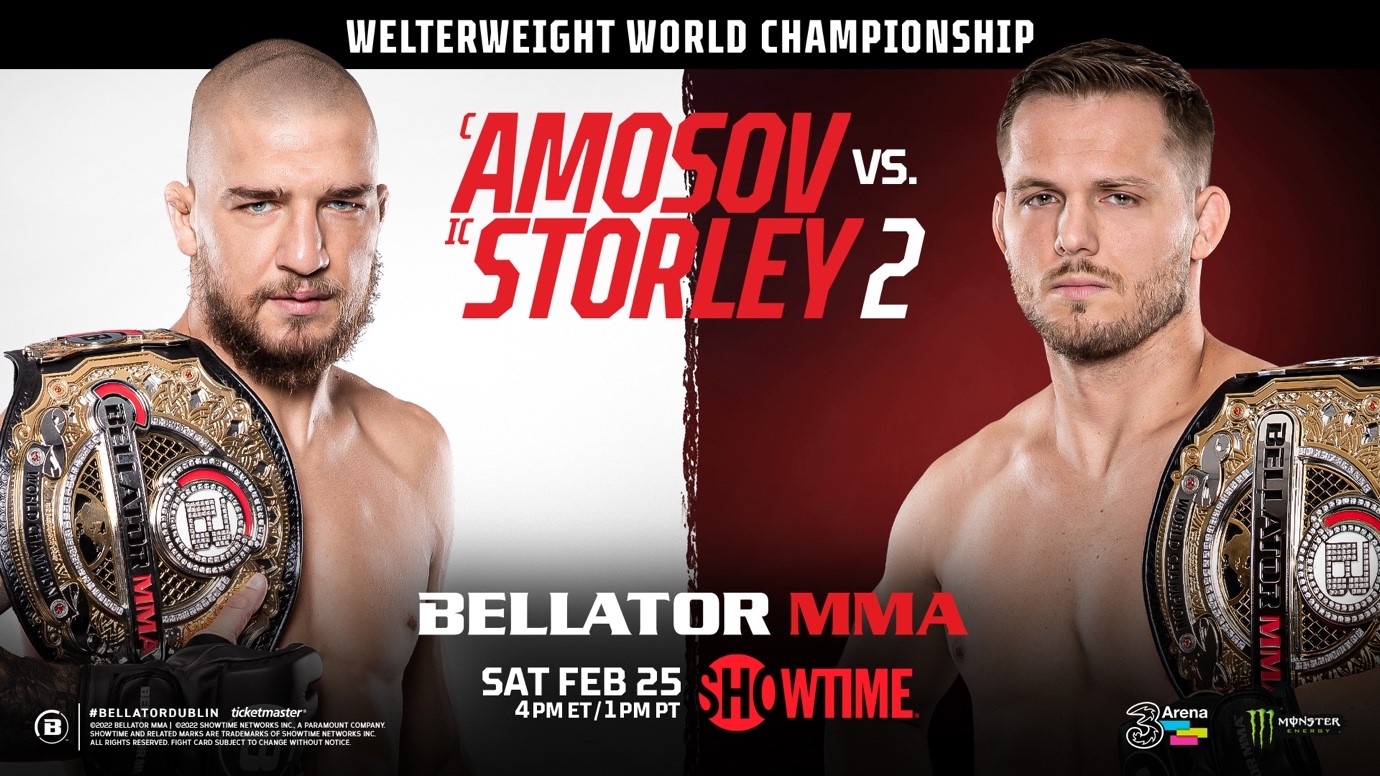 DUBLIN, IRELAND – Two months ago, the best fans in the world helped propel BELLATOR MMA 285 to a record-breaking gate at Dublin’s 3Arena. Today, the Paramount-owned promotion has announced a can’t-miss BELLATOR Welterweight World Championship unification bout as the main event of BELLATOR MMA 291, which is set for an updated date of Saturday, Feb. 25, 2023.

Welterweight World Champion Yaroslav Amosov (26-0) returns to the BELLATOR cage after the heroic defense of his home country of Ukraine, and is set for a rematch against interim titleist Logan Storley (14-1). Amosov is one of the top fighters in the world and currently holds the longest active unbeaten streak in all of MMA. Perfect through his first 26 professional fights, he is only three wins away from eclipsing retired MMA star Khabib Nurmagomedov’s record of 29 consecutive wins.

Storley, a four-time NCAA D1 All-American wrestler at the University of Minnesota, will look to make the necessary adjustments to spoil Amosov’s entry into the history book and avenge his sole professional blemish when he dropped a tense split decision to the Ukrainian in November 2020. The 30-year-old Kill Cliff FC product is currently riding a three-fight winning streak.

BELLATOR 291: Amosov vs. Storley 2 will air LIVE on SHOWTIME at 4 p.m. ET/1 p.m. PT, while the preliminary portion of the event will air free-to-watch beginning at 11:30 a.m. ET/8:30 a.m. PT on the BELLATOR MMA YouTube channel, the SHOWTIME Sports YouTube channel, and Pluto TV. Tickets for the event are selling fast and can be purchased at Ticketmaster.ie and Bellator.com now.

The co-main event of the evening will feature SBG Ireland’s own No. 3-ranked featherweight Pedro “The Game” Carvalho (13-6) of Portugal taking on No. 5-ranked Jeremy “JBC” Kennedy (18-3), a Canadian fighter who trains out of the acclaimed Xtreme Couture gym in Las Vegas. With more than a year of steady trash talking escalating a feud that is ready to boil over, this is a must-watch grudge match.

The event’s Eurocentric preliminary card will spotlight several of Ireland’s favorite BELLATOR fighters, as well as a host of top continental prospects and contenders.

In other thrilling action, No. 9 light heavyweight Karl Moore (10-2) returns to the 3Arena following a dazzling performance against fellow top-10 ranked Karl Albrektsson to face Poland’s Maciej Róźański (14-3), while Wexford, Ireland’s Brian Moore (15-9) looks to similarly build off his BELLATOR 285 momentum when he welcomes Luca Iovine (18-8) to the BELLATOR cage.

Additionally, a pair of fantastic featherweight fights will pit Richie Smullen (9-2-1) returning in a must-see matchup against Piotr Niedzielski (17-4), while French phenom Asaël Adjoudj (4-1) will squares off against scintillating Scotsman Calum Murrie (5-3).

Meanwhile, a duo of middleweights from London Shootfighters will go to work as Mike Shipman (14-4) takes on SBG Ireland’s Charlie Ward (10-5), and hungry Hungarian Norbert Novenyi Jr. (5-0) will put his perfect record on the line against Andy Manzolo (26-9).