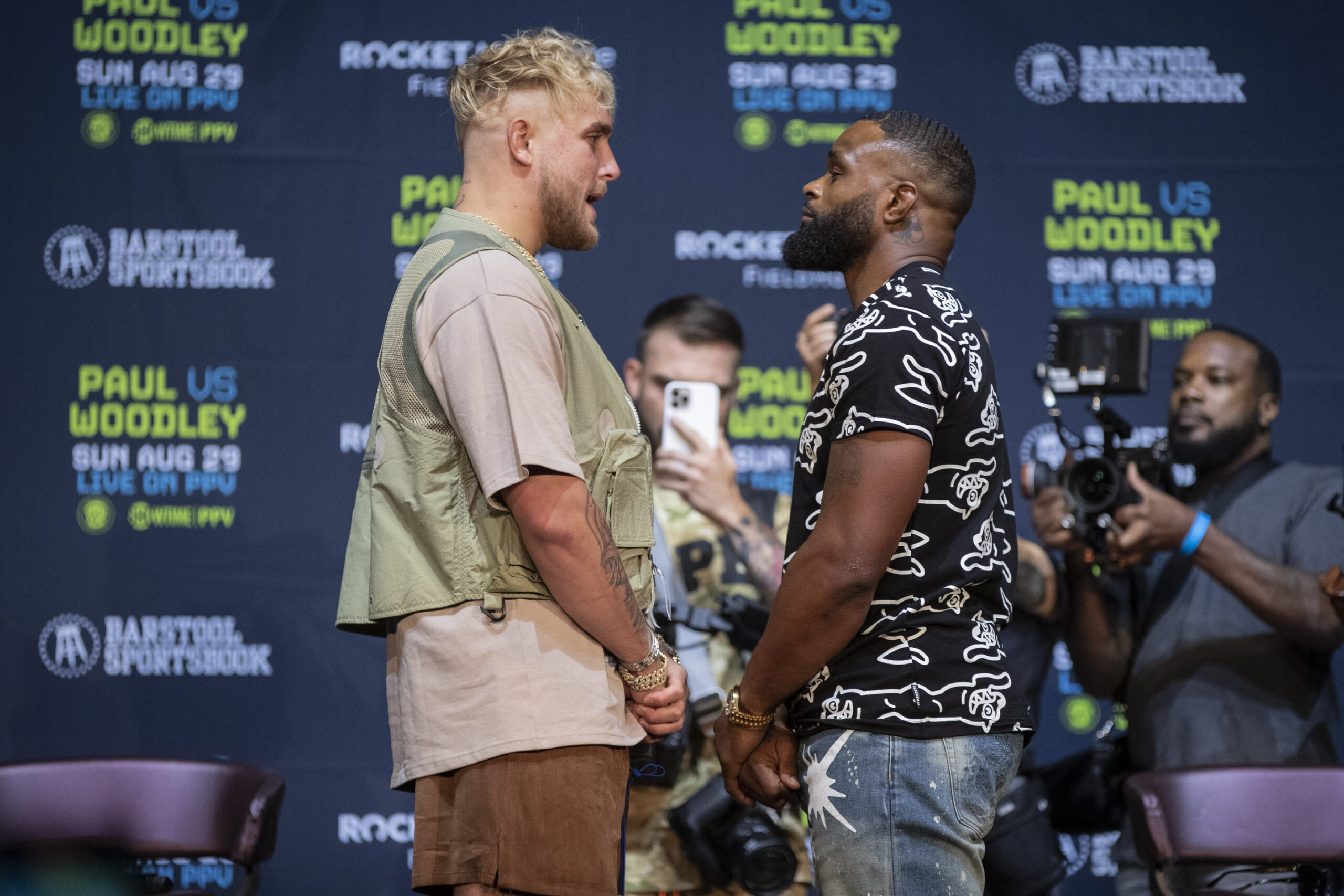 LOS ANGELES (July 14, 2021) –Professional boxer and renowned content creator Jake “The Problem Child” Paul and former UFC champion Tyron “The Chosen One” Woodley went face-to-face during a press conference in Los Angeles on Tuesday as they previewed their professional boxing showdown that will headline a SHOWTIME PPV on Sunday, August 29 at Rocket Mortgage FieldHouse in Cleveland, Ohio.

During the press conference, Paul and Woodley agreed to a bet where the loser of their fight will have to get their opponent’s name tattooed on them. Watch them discuss the terms HERE.

Here is what the press conference participants had to say Tuesday from The Novo at L.A. Live:

“I saw fear in his eyes. I saw a man who accepted a fight for a paycheck. He doesn’t really have any fight left in him. He’s been defeated multiple times now and he will be sent into retirement by a Disney/YouTube/professional boxer in myself.

“This is my toughest fight by far and that’s exactly what I want. I want to increase the skill level of my opposition and challenge myself. He was a legitimate knockout artist. But on August 29, in my hometown, you will see a boxing clinic. He’s not going more than three rounds.

“I think the secret is out of the bag. I’m sparring some of the best fighters in the world. When I knock out Tyron, people are going to say that I’m the ‘Real Deal’ like Amanda Serrano. I’m going to take Tyron into deep waters and drown him.

“This is my make or break fight. The MMA community is counting on Tyron. They want to see me fall, but he’s not going to be able to get the job done.

“People know what they get when they tune in to a Jake Paul event. That’s why I’m the most impactful 3-0 fighter in history. I’m knocking this guy out. That’s what people want to see.

“I haven’t been hit in three fights. That’s a fact. I just want to add some experience to my belt. I want to fight Canelo Alvarez in three years. I want to be a world champion. Tyron is the perfect person to maybe get me to the third round.”

“Everything you’ve scripted and wrote down for right now, you’re shaking while saying it. This is a fight. This isn’t for play. This is for real.

“Look at my resume. Look at all the up and coming fighters who they gassed up and what happened to them. None of them landed a punch. So many people come up to me on a daily basis and say you have to knock this guy out.

“It was a good opportunity working out with Floyd Mayweather. He showed me some of the things it takes to be a world class boxer. In MMA sometimes we waste energy and use movement without purpose. Everything I do and everything I throw is going to hurt him. My feints are going to hurt him. It’s going to make his body shake.

“I’m from the ‘Show Me’ state and you have to show me. I’ve been on the big stage. I was the fight of the night at the biggest UFC fight at MSG in history. This is nothing new to me.

“You just talk about money and talk about clout. Because when we talk about fighting, you shouldn’t even be in the same sentence as me.

“He’s talking about Disney because it’s an excuse for when I wax him in the ring. This is going to look like a fight. I’m not just going to go out there and swing two punches. I’m training like I’m fighting Mike Tyson.

“I didn’t get into this for a quick payday. This is my entry into boxing for sure. It’s a steppingstone. When I look at him, I see a kid who has nothing to lose. I’m not going to act like he doesn’t have power, but everyone I’ve faced who had power, made me train even harder.”

“I want to thank Yamileth for taking the fight. She’s a real Mexican champion. Not too many people want to fight me. It’s going to be a great fight. It’s never a boring night when it’s Puerto Rico vs. Mexico. It’s guaranteed to be a night of fireworks.

“I’m the best fighter that I can be and it’s an honor to be anywhere in the top three as one of the best pound-for-pound fighters in the world. To my team and to my country, I’m number one.

“August 29 is going to be nothing but fireworks. I always bring a great show and look great doing it. I think Paul and Woodley are going to have competition for best fight of the night.

“I wasn’t surprised the other featherweight champions didn’t want to fight me. We’ve been going after them for a while now. My goal is still to become undisputed and I hope we get those fights soon.”

“I’m very excited for this fight and thankful for this opportunity. I’m a new generation of fighter and I’m very blessed to be in this fight with Amanda. I wanted to compete at featherweight. I feel strong and I’m ready for this.

“I started my career in this weight class before going down, so I’m very happy to be back at this weight. I have no concerns about it.

“For over 35 years, SHOWTIME has been the network for high-quality, big-time combat sports events. From the most promising young prospects to boxing’s most accomplished champions, to quite literally the biggest pay-per-views in sports history, to the highest quality, most exciting MMA, we bring it all to you. Our current schedule is great proof of that. This Saturday, Jermell Charlo goes to make history by becoming the first undisputed four-belt champion in the super welterweight division against a very tough Brian Castaño. Next week, the 20th anniversary of ShoBox, the only series in boxing that identifies and develops young champions year after year. July 31, right here in LA at The Forum, BELLATOR’s biggest fight ever in Patricio Pitbull vs. AJ McKee for the Featherweight World Grand Prix Championship and the one-million-dollar bonus. That’s all in just the next three weeks.

“In just three fights, Jake Paul has become the talk of boxing and of combat sports. People ask me repeatedly, why did we become involved in this? The reality is, what Jake has done in his first three fights is unprecedented in combat sports. Nobody has generated this kind of attention in three fights. The commitment that Jake has made is that he respects the sport. He takes it seriously and he is committed to fighting tougher opponents with each fight. And you see that. He is progressing with each fight and I promise you that will continue to happen going forward.

“We know exactly what to expect from Tyron Woodley. A Strikeforce fighter who appeared nine times on SHOWTIME. He’s a UFC Champion. Fourteen of his 19 wins were by TKO or submission. He is an elite combat sports athlete. This is an intriguing matchup. A true 50-50. If anybody tells you they know how this fight is going to go, they’re lying. This is the epitome of a 50-50 fight.

“We are going to surround the main event with high quality boxing matches. SHOWTIME is proud of its history in women’s combat sports, both boxing and MMA. We’ve had Amanda Serrano on SHOWTIME before and we’re proud to welcome her back to the network. She is without question one of the best pound-for-pound female fighters on the planet and possibly the best. She has her work cut out for her with Yamileth Mercado, a champion in her own right. She brings her own belt into this, and it’s another installment of the classic Puerto Rico vs. Mexico rivalry.

“This is not a novelty. This is not an exhibition. This is real boxing. This is a competitive sporting event and it is something that you should not miss.”