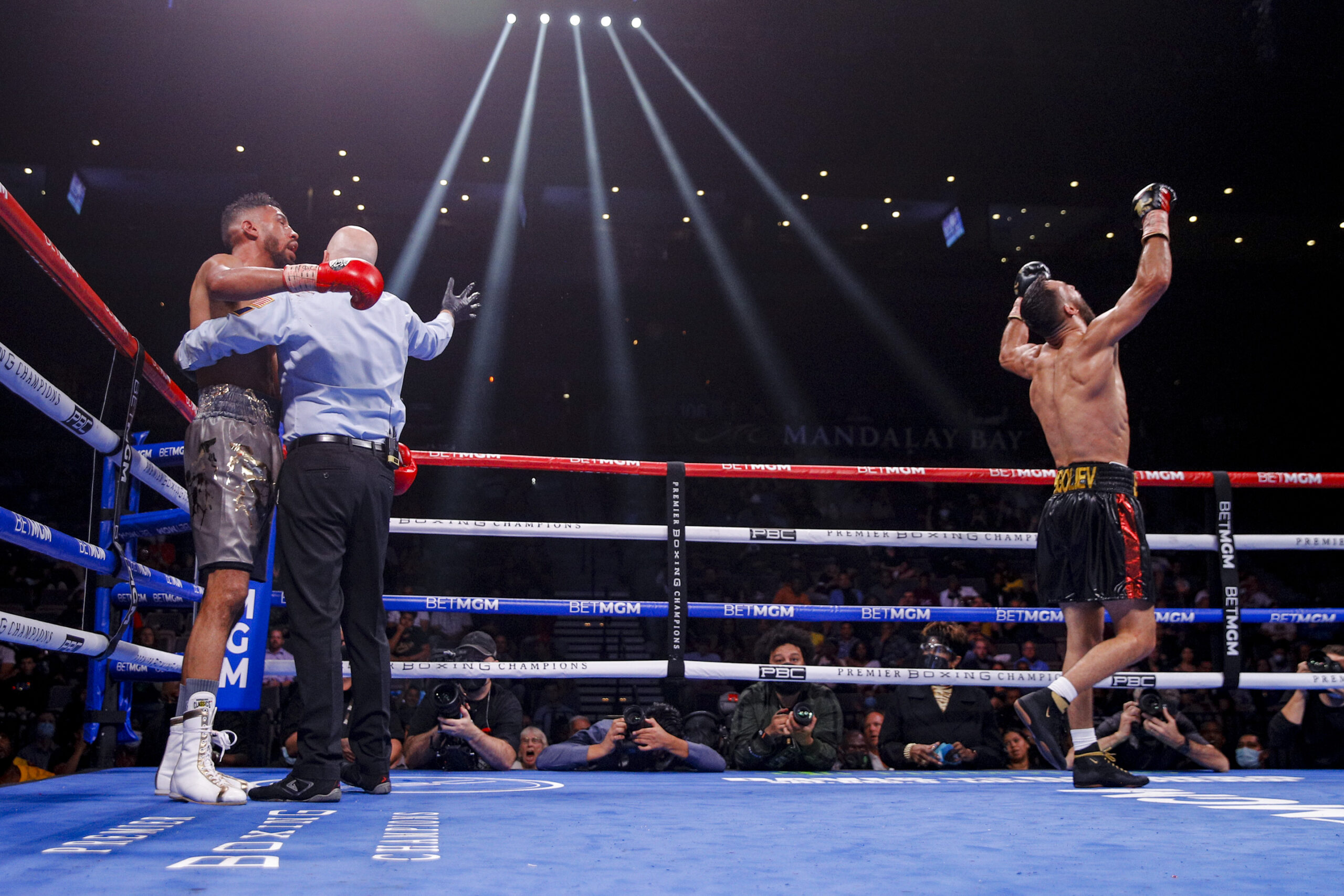 “This is very important for me,” said Butaev (14-0, 11 KOs). “It’s a big first step. It’s always been my dream to become a world champion. I took the first step today and I’m very happy.”

Butaev was able to overcome his rangier opponent with patience and a brutal body attack. While James (27-2, 12 KOs) controlled the initial action with activity, Butaev stalked his opponent and slowly closed down the distance.

The bout began to turn distinctly in Butaev’s favor in round four, as the body punches slowed James output and left him vulnerable to Butaev’s offense. James looked to keep Butaev at bay with awkward movement, which eventually led to referee Celestino Ruiz deducting a point from Butaev in the fifth round.

The deduction did not deter Butaev from coming forward, as he continued to pour on punches and began to bloody James’ face on top of the damage he had dispensed to the body. Butaev out landed James 175-121 according to CompuBox, including 36 body shots and 46 to 36 edge in jabs landed.

James continued to try to find a punch to change the tide, but was unable to display enough power to keep Butaev from coming forward. Eventually, with blood pouring out of James’ nose, the referee jumped in during a Butaev flurry and waived off the fight 2:12 into the ninth round.

“I’m good, it just wasn’t my night tonight,” said James. “A big shout out to Butaev, he did his thing tonight. I’d rather go out on my shield if I’m going to go out. I thought it was a very competitive fight but that’s why we have a referee. He was just a better man tonight. I don’t want to make any excuses. I couldn’t keep him at range and I think rust played a part of it. But that’s boxing. Sometimes it’s not your night.”

“It was a good knockout,” said Ennis. “You know me, I wanted to show my skills and abilities. I’m just thankful for this opportunity. Now it’s on to the next. Let’s get the big names.”

With the dominating performance, the Philadelphia-native Ennis became the first fighter to stop the durable Dulorme since Terence Crawford accomplished the feat in 2015. Ennis found his opening with a big overhand right that caught Dulorme and sent him down for the first knockdown.

“We got it early, that’s OK by me,” said Ennis. “We don’t get paid for overtime. I knew it was over after that first knockdown. I just had to take my time and not rush anything. Everything I did today we worked on in the gym.

Dulorme was able to get to his feet, and tried to turn the tide throwing big power punches after the knockdown, but was quickly met with a punishing one-two punctuated by a right hook that sent him down again. Dulorme was unable to beat the count as referee Mike Ortega halted the fight just 1:49 into the round.

“I’ve been ready for a world title two years ago,” said Ennis. “I want the top guys: Errol Spence Jr., Yordenis Ugas, Shawn Porter, Terence Crawford, Keith Thurman. I’m ranked No. 3 in the IBF, so Errol Spence Jr. is who I want next.”

In the opening bout of the telecast, lightweight contender Michel Rivera (22-0, 14 KOs)remained unbeaten, cruising to a unanimous decision victory over Argentina’s Matias Romero (24-2, 8 KOs) after 10 rounds of action.

Rivera and Romero train out of the same gym in Miami and share a promoter, bringing an unusual amount of familiarity into the showdown. Despite that, Rivera insisted post fight that his focus was solely on continuing his promising career ascension.

“I really don’t have beef with anybody,” said Rivera. “I’m just fighting to be great in boxing. He took the fight because he knows me and he needs the money. I said no to this fight at first. He took it. It’s finished now and we both move on.”

The 23-year-old Rivera controlled the fight with a dominating jab as he landed 104 to Romero’s 17. Romero looked to circle Rivera in the early rounds as he tried to keep Rivera from planting his feet and landing power punches.

“I just had trouble getting to the right distance,” said Romero. “He was hitting me with the jab and I just couldn’t reach him. I wanted to counter but I couldn’t get there fast enough. I tried to engage but he really didn’t want to. He beat me fair and square. He didn’t bring anything I haven’t seen before but he did a good job.”

As the fight wore on, Rivera was able to find more places for those power punches to land, including 47 body shots that slowed any attack Romero was able to put together. Overall, Rivera out landed Romero 202 to 106, on his way to a unanimous decision by the score of 100-90 three times.

Despite dominating the fight, Rivera believes he has room for improvement in his performance.

“Well, really I did everything I could,” said Rivera. “I don’t feel good about my performance. I know that I can be a lot better than I showed tonight. Of course I can improve and get some more experience. I’m No. 2 in the WBA so I think I’m just waiting for a world title shot.”

Saturday’s SHOWTIME CHAMPIONSHIP BOXING tripleheader will replay on Sunday at 9 a.m. ET/PT and Monday at 10 p.m. ET/PT on SHOWTIME EXTREME.